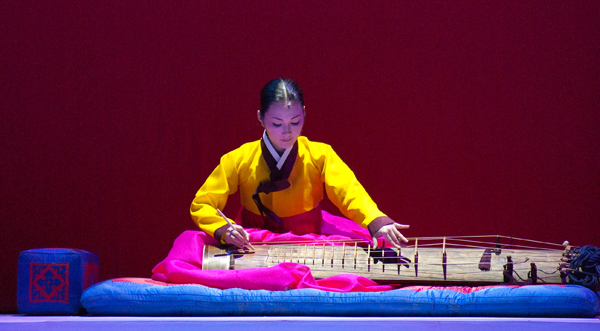 The National Changgeuk Company of Korea will introduce its new repertoire “Chunhyang,” for the second edition of the National Theater of Korea’s “repertoire season.” Provided by NTOK

A 63-year-old theater at the foot of Mount Namsan has been resonating diverse music from the traditional sounds of sori (narrative singing) to French operas. According to officials at the National Theater of Korea, an increasing number of people have been watching shows there. About 64,000 people attended shows at the theater between September 2012 and June 30 of this year, officials said, which is about 23,000 more than two or three years ago during the same time of year.

The National Theater of Korea announced its repertoire for the second half of this year until the first half of next year last week by selecting “highly praised performances by the audience” as well as new works from its resident companies. This second edition of “repertoire season,” which kicks off on Aug. 14 and runs until June 28, 2014, has 63 works and 13 premiers.

As part of the new repertoire, the National Changgeuk Company revised its lineup of changgeuk performances (traditional Korean opera), which has long been considered a genre of Korean traditional music that’s boring, difficult to follow, and appeals only to highly patriotic audiences. So, new operatic elements and story lines were added, which led to increased interest and sellout performances.

Tickets for the three performances of the National Changgeuk Company of Korea - “Janghwa Hongryeon,” “Seopyeonje,” and “Baebijangjeon” - sold out.

“Many people were concerned about how the theater would pull this off when we did not have many signature repertoires,” said Ahn Ho-sang, president of the National Theater of Korea. “But we managed to draw in viewers, especially to our traditional performances, and the experience gave us a lot of confidence in ourselves.”

In addition to the three shows that attracted many patrons during the first edition, including “Janghwa Hongryeon,” the National Changgeuk Company will introduce three new works. A love story from the era of the Joseon Dynasty, “Sookyoung Nangjajeon,” by writer Kim Jeong-sook and director Kwon Ho-seong, will come alive onstage. Meanwhile, the famous story of “Chunhyang” will be turned into a changgeuk by Jang Yoo-jeong, who is best known for the musical, “Finding Mr. Destiny” and is considered to have a Midas touch in the musical world.

Moreover, popular play director Koh Sun-woong, who directed “Azure Day” is also making his changgeuk directing debut with the troupe in the upcoming season. The title has not yet been named.

The National Dance Company of Korea’s performance of “Alter,” which was choreographed by Ahn Sung-soo and costume-designed by popular fashion designer Jung Kuho, will be staged again for the upcoming season while a new collaboration work with Jung, titled “Mookhyang” will also debut. Meanwhile, the Korea National Ballet will continue to stage “Giselle” and the Korea National Opera will stage “Carmen” and “Don Carlo.” For more information, call (02) 2280-4114 or www.ntok.go.kr.