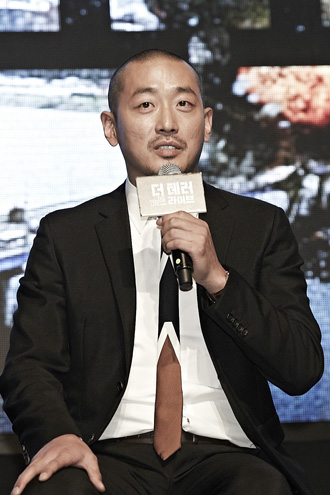 Ha Jung-woo is back on the big screen. The star of last year’s hit action film “The Berlin File” will take on another thriller, this time in “The Terror Live,” directed by first-time feature film director Kim Byung-woo.

As the title suggests, the subject matter is terrorism, and the trailer has attracted plenty of attention for its explosive attack on the Mapo Bridge.

But, unlike in his previous films, this time around Ha does most of his action while sitting down, as he plays a panicked radio host who broadcasts a live phone conversation with the terrorist.

With less than a month until the film’s release, Ha took the time to talk about “The Terror Live,” which will see him play one of his most serious characters yet.

Q. What is so intriguing about this work?

A. The fact that there is just one lead from start to end was new, and despite this, the scenario was entertaining. I wondered how it would be possible to film it, but as I worked on it, I realized that the scenario was really quality stuff.

Were there any challenges that came with filming a movie where most of the scenes are of a studio?

The movie goes by in chapters lasting from five to 12 minutes each. We recorded each chapter without stopping, so we had to tackle it like a play rather than a movie. It had to flow and you had to know your material well. We wanted viewers to not be bored as 95 percent of the movie was me sitting at a desk. It was frustrating, to be confined to one space from start to end. It was just [me] speaking nonstop. The amount of script was insane. The only way was to learn my lines, again and again.

On your commute to the set, you must have travelled on the Mapo Bridge, which of course gets blown up. Was it strange driving on it?

Sure, but not to an unusual degree. I’d be travelling on it and think “Oh, this is that bridge.”

You’ve played a lot of tough guys before. Playing an anchorman must have been a new thing. What was your first thought upon landing the lead?

I thought “Wow, I’ll be speaking in a Seoul dialect for the first time in a long time.” But then I was burdened by the amount of it all.

Also, playing an anchorman, as I was speaking I’d ponder over whether a word was the right one, and so on. Plus, there was still a rough side to the character - a roughneck can be a newscaster, too.

What were your initial thoughts about working with Kim, who of course is a newcomer compared to you.

Even before filming I went down to the location for a month to prepare, because I thought I had to soak up as much as I could.

When I met Kim he handed me a graph depicting a character’s emotions. When I saw it, I realized it was going to be intense and knew it would be a great film. I felt like I could trust him.

You are famous for your trademark eating scenes. Can we expect some comical moments of you eating in this movie?

In this film, sitting at the desk I consumed a lot of tea and water.

Because of the pace of the plot, we couldn’t really slot in an eating scene. At first we did plan for some sandwich and gimbap scenes, but we couldn’t really fit it in. I know that it is an element of my acting that viewers look forward to and I’m grateful for that, but because it broke the rhythm of the film, we had to be mindful of that.

You are up against some stiff competition with some major Korean films coming out next month. How do you feel about your competitors?

I like and respect director Bong Joon-ho [“Snowpiercer”] and would like to work with him at some point. Kim Yong-hwa [“Mr. Go”] I’ve worked with on “Take Off” and we’ve remained close. Then there’s my film, which stars just me. We are all paving the way for Korean cinema and I hope we will all at least break even and be rewarded for our hard work.