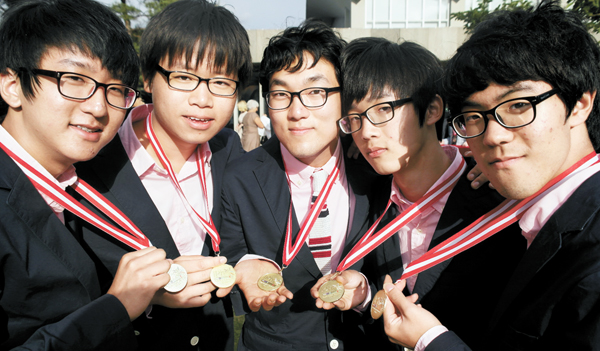 A Korean high school team has tied with China for first place at this year’s International Physics Olympiad (IPhO) in Copenhagen, Denmark. It’s the third time a Korean team has scooped the top prize, following wins in 2003 and 2011.

Russia and Singapore tied for second and the United States, Taiwan and Thailand came in third.

Professors Lee Moo-hee of Konkuk University and Jeong Dong-ryeol of Seoul National University served as coaches for the Korean team.

“The government will keep encouraging talented young people to participate in such international competitions so that they can fulfill their potential and foster more brilliant youth,” said Kim Jeong-gi, director of the division at the Ministry of Science, ICT and Future Planning that focuses on nurturing gifted students.

The International Physics Olympiad, an annual competition for high school students, began on July 7 and wrapped up yesterday. This year, 381 students from 88 countries took part in the nine-day event. One of the International Science Olympiads, the first IPhO was held in Warsaw, Poland in 1967. National delegations have five students at most, plus two coaches.

The students compete as individuals and undergo intensive theoretical and laboratory examinations throughout the competition. The theoretical exam only has three questions but lasts for five hours.

Korea is hosting the event in 2027; next year’s host city is Astana, Kazakhstan.