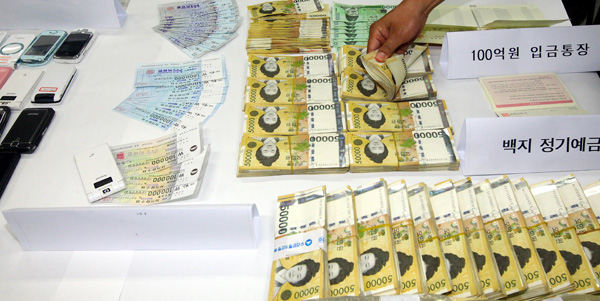 The Gyeonggi Provincial Police yesterday show to the press cash they retrieved as evidence in the bank scam. [NEWSIS]

A professional conman with ambition, greed and talented accomplices was apprehended Friday, ending an 11-month hunt.

Na Gyeong-sul, 51, was arrested Friday at a studio apartment in Ganggnam, southern Seoul, where he had been living. Another 13 people were arrested earlier, including 60-year-old former police officer Choi Young-gil, who was with the Seoul Metropolitan Police Agency until 1990.

They are all suspected of being involved in a plot to defraud a man out of 10 billion won ($8.91 million).

And conman Na has been hunted since last August for forging a 4.7 billion won promissory note.

The Gyeonggi Provincial Police Agency said yesterday it arrested the 14 people and are pursuing three more suspects. Choi was arrested Saturday at a relative’s house in Busan.

Here’s how they describe the 10 billion won heist, which succeeded at least partly. Police didn’t say whether the stolen money can be recovered.

In October last year, Na acquired a blank certified check, which only had a 10-digit account number from a 41-year-old bank teller surnamed Kim at the Hangangro branch of Kookmin Bank in central Seoul.

Former policeman Choi was introduced to a private moneylender named Park. He told Park he had to prove to someone that he had a large sum of money, and asked Park to lend him a certificate of deposit that showed 10 billion won deposited in his account from June 11 to 14.

Choi gave Na the bank account number. Using a color inkjet printer, one of Na’s accomplices managed to print that account number on the blank check.

The National Forensic Service said that the ink used to forge the check was the same kind as used by banks.

Na filled out the fake check with an amount: 10 billion won.

On June 12, Choi appeared at the Jeongja branch of Kookmin Bank in Suwon, Gyeonggi, handed a teller the check and asked that the sum be split into two accounts. The bank employee checked the serial number and balance of the account on which it was drawn.

Choi then transferred the 10 billion won into dozens of other bank accounts under the names of 10 people he had paid to cooperate.

Na allegedly took 1.8 billion won. A 44-year-old private moneylender named Kim was allegedly given 3.3 billion for hooking Choi up with Park. Choi took 300 million won and the rest of the money was distributed to other members of the ring, the police said.

The police said Na was preparing another bank fraud worth about 100 billion won with his accomplices. Na told the police during questioning that they created a fake bank account at Kookmin Bank in cooperation with the bank teller and planned to trick a man of means into depositing 80 billion won to 100 billion won into the account.