Finance minister to focus on impact of U.S. easing

Finance minister to focus on impact of U.S. easing 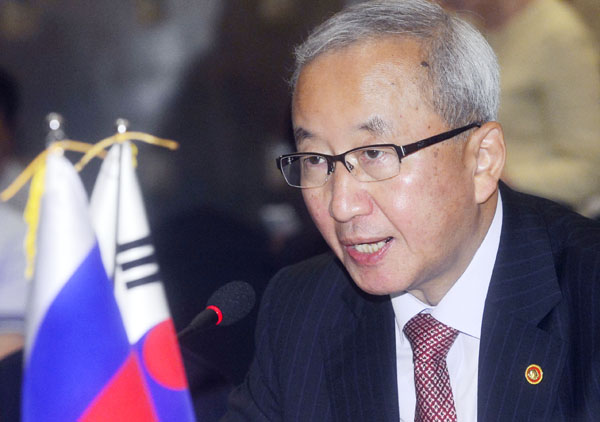 Korean Finance Minister Hyun Oh-seok will spearhead emerging economies at the Group of 20 meeting of finance ministers and central bank governors, starting this Friday in Russia, in order to represent the group’s stance on the global impact of the tapering of U.S. quantitative easing.

The upcoming G-20 meeting in Moscow is expected to focus ways to minimize that impact.

“The U.S. government needs to consider the timing, speed and method of implementing its exit strategy to help minimize negative spillover on other countries,” Hyun said at a press conference yesterday. “The U.S. exit strategy has a so-called ‘reverse spillover effect.’?”

A new tendency in the international financial world is for all markets to stare at the mouth of U.S. Federal Reserve Chairman Ben S. Bernanke, fluctuating according to what he says, said a director general at the Finance Ministry.

“Negative spillover impacts could include a sudden exodus of foreign capitals in various countries and higher interest rates,” Hyun said.

The Korean government is concerned about higher interest rates that could increase banks’ losses as investors sell off bonds, while aggravating debt-ridden countries’ fiscal soundness, the director general explained.

“Some advanced countries regard it as none of their business, but they are not exceptions,” the minister said.

If emerging countries start selling assets in order to make up shortfalls in dollar reserves, it will be a further drag on global economic recovery and aggravate the imbalance problem in international trade as those countries would import less, he explained.

The Korean finance minister’s stance has won support from his counterparts in China and Russia, the two biggest emerging economies, according to a ministry official.

Hyun will lead the first session of the G-20 meeting.

“Korea’s role might be bigger in this meeting, unlike the Washington meeting in March,” said Yoo Gwang-yeol, director general of the international finance and cooperation bureau at the ministry.

In March, the Korean finance minister asked for international understanding of the negative effects of Japan’s Abenomics on the Korean economy, but his voice was hardly heard as the United States and other advanced countries approved of the Bank of Japan’s massive quantitative easing measures.

“After the U.S. Fed announced a possible end of quantitative easing on June 19, the Kospi plunged below the 1,800 mark for the first time in 11 months June 24, due to a strong selling spree triggered by foreign investors,” said Shin Chang-mok, a research fellow at the Samsung Economic

Research Institute. “This shows that Korea is a decoupled market from the improving U.S. economy.

“When the United States will pull out of the monetary policy and how it will affect global recovery and financial markets is not precisely known,” Shin added. “But it will not only raise interest rates, but worsen the recession in the housing market in each country and undermine consumer spending.”

In 1994, the U.S. government’s unexpected austerity measure triggered financial crises in nearby countries like Mexico.

Said Hyun: “As Mark Twain once said, ‘History does not repeat itself, but it does rhyme.’ There is an urgent need for G-20 countries to collaborate in a bid to prevent a similar experience.”

During the two-day meeting, Hyun plans to hold bilateral talks with his counterparts from the United States, China, Germany and Australia, and also with Christine Lagarde, managing director of the International Monetary Fund.