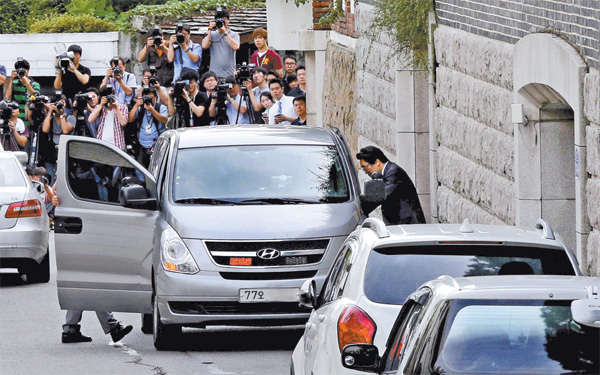 A team of investigators leaving the house of former President Chun Doo Hwan in western Seoul yesterday after seven-and-a-half hours of search and seizure to collect fines. By Kang Jung-hyun

The home of former President Chun Doo Hwan was raided yesterday by the prosecution as a part of a campaign to uncover his hidden assets.

A special team of the Seoul Central District Prosecutors’ Office dedicated to collecting punitive fines imposed on Chun in the 1990s said that 17 other sites were also raided yesterday.

Dozens of investigators from the law enforcement authorities including the National Tax Service made the surprise search and seizure yesterday morning.

According to the prosecution, a total of 87 investigators including forensics specialists from the Supreme Public Prosecutors Office were dispatched to locations linked to the Chun family including a publishing company, a resort and a real estate developer.

Chun came to power in 1980 through a military coup and ruled the country until 1988. In 1997, the Supreme Court convicted Chun of accepting bribes and running slush funds during his presidency. The court ordered him to pay 220.5 billion won ($197 million) in fines, but he has an outstanding balance of 167.2 billion won.

Seven officials were sent to the former president’s residence in Yeonhui-dong, western Seoul. The raid at Chun’s house ended around 4:30 p.m. During the seven-and-a-half hour raid, Chun and his wife, Lee Soon-ja, were at home and cooperated in consultation with their lawyer, prosecution sources said. 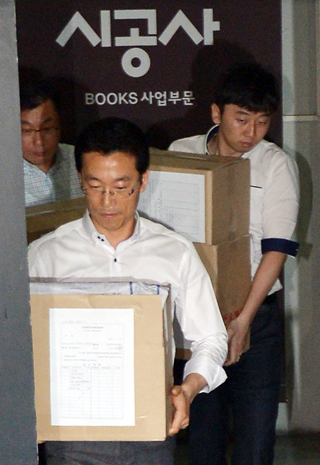 To find valuables hidden inside Chun’s home, the prosecution brought metal detectors and other equipment.

According to the sources, expensive artworks ranging from paintings and ceramics were found. The art may be claimed by the government after confirming that Chun provided the money to buy them.

Yesterday’s massive search and seizure signaled that authorities were going after the entire family of the former military-rule strongman.

“After the raids are over, we may summon related people,” Lee Jin-han, a senior prosecutor at the Seoul Central District Prosecutors’ Office, said yesterday. “What we did today is not just seizures of assets, but steps in an investigation.”

The prosecutors want Chun’s hidden assets and proof that the wealth of Chun’s children derives from their father.

It was the first search and seizure at Chun’s home in a decade. In August 2003, the prosecution seized properties from his home, auctioned them and raised 170 million won to pay against the fine, which is punishment for crimes he committed during his presidency.

Chun made his last payment of 3 million won three years ago but has refused to pay any more. While Chun insists that he has no more than 290,000 won in wealth, his eldest son was recently named in a tax haven investigation, fueling suspicions that assets stashed abroad are from the father.

In May, the prosecution created a special team to uncover his hidden assets. President Park Geun-hye vowed last month to go after Chun and make him pay his fine.

The National Assembly passed a law last month to extend the deadline to collect the fine from this October to 2020. The law also enabled the government to collect the money not only from Chun but also from family and relatives suspected of colluding with him to hide his fortune.

Sigongsa, the publishing company owned by the Chun family, had 44 billion won in revenue last year and it has buildings in Seocho-dong, southern Seoul, and Paju, northern Gyeonggi. The real estate properties were appraised at about 30 billion won.

Chun Jae-kook, the eldest son of Chun, owns a 50.53 percent stake in the company. His siblings and wife own the rest.

The Herb Village in Yeoncheon, Gyeonggi, is also owned by Chun Jae-kook’s family. It has 66,200 square meters (16.35 acres) of land and is appraised to be worth at least 17 billion won.

Chun Jae-kook was reported last month to own a shell company in the British Virgin Islands.

The former president’s second son, Jae-yong, and his family own a real estate company, BL Asset.

The former president’s brother-in-law was suspected of having managed his slush funds. Lee Chang-seok, the younger brother of the former first lady, made some suspicious real estate deals with the Chun family. In 2006, he sold a large piece of land in Osan, Gyeonggi, to Chun’s second son for 2.8 billion won, reportedly one-third of its market value at the time. Chun junior sold the land for 40 billion won the following year, earning a massive profit.

The ruling and opposition parties, which approved the special law to go after Chun, yesterday supported the prosecution’s move.

“We hope the prosecutors do their best to uncover hidden assets and collect the fine,” said Representative Kim Kwan-young, spokesman of the Democratic Party. “They need to prove that justice will be done no matter how long it takes.”

The Saenuri Party spokeswoman, Representative Min Hyun-joo, said the ruling party has its faith in the judiciary and the prosecution.