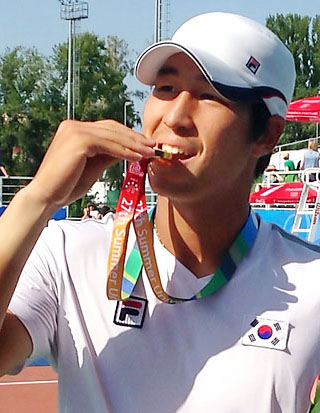 Medals in tennis and rhythmic gymnastics helped keep Korea in fourth place at the Summer Universiade games in Kazan, Russia, with only a day to go before the 12-day event wraps up.

Tennis player Lim Yong-kyu successfully defended two titles on Tuesday. Lim beat Antso Rakotondramanga of Madagascar in men’s singles 6:4, 4:6, 6:2, and helped Korea pick up a gold in the men’s team category, both of which he won in the 2011 Summer Universiade in Shenzhen, China.

On Monday, Lim and Noh lost the men’s doubles semifinals to Lee Hsin-han and Peng Hsien-yin of Taiwan 2-0, although they did pick up a bronze medal under the rule which gives to a medal to all the semifinalists.

“I was sorry that I ended up with a bronze medal in doubles, so it was good to win a gold medal with the younger players,” Lim, 22, told reporters. “Because of my pride as a Korean representative, I didn’t give up and tried to focus, and that led to a good result.”

Son, who has emerged as a popular figure for many Koreans since her fifth-place finish at the London Olympics, made headlines again when she received 18.000 points in the ball final, second-highest after Alexandra Merkulova of Russia, who received 18.233 points.

Son, who ended up in sixth place in the individual all-around on Monday, finished fifth in the clubs final with 17.700 points, and seventh at ribbon with 17.500 points.

The ball score is the first time Son has received a score of 18 points in an internationally sanctioned event, leading many local analysts to say it bodes well for Son’s medal possibilities at the World Championships in Kiev, Ukraine next month.

As of Tuesday, Korea was in fourth with 17 gold medals, four golds ahead of Belarus, although well behind China and Japan, who are tied in second with 24 golds each.