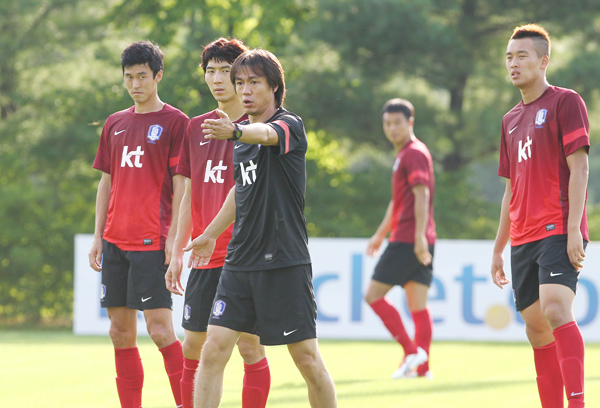 Hong Myung-bo will debut as national coach at the East Asian Cup with a heavy weight on his shoulders; the prestigious job could prove to be a poisoned chalice for the popular former player, who is coming off a successful stint as Olympic team manager.

Hong, who replaced Choi Kang-hee late last month, has only two and a half days to realign the national team before entering the four-nation competition that will open with a Korea-Australia match in Seoul on Saturday. The training of his 23 players started Wednesday afternoon. Except for a resting time before Saturday’s match, Hong is given only two days.

But, he is confident. In fact, last-minute preparation is his specialty.

While building a coaching career at major events such as the 2010 Asian Games and the London Olympics, the 44-year-old Hong drafted a manual on short-term team management, which he named “48-hour management.” It was also the theme of a paper he wrote in 2010 to complete the Asian Football Confederation Pro Diploma Coaching Course, the highest coaching certification course in Asia.

The first thing he did for the East Asian Cup was taking control of the team. During the London Olympics, he tried to imbue team spirit to the players using slogans. He put five mantras, in particular - confidence, unity, sacrifice, cool-headedness and responsibility - into the players. After he took the helm of the national team, he coined a slogan, “One Team, One Spirit and One Goal.”

He tried to create unity in the team by implementing a dressing code. The players reported to the National Football Center in Paju on Wednesday in suits. The coach did the same.

Kim Shin-wook, a striker, said that Hong’s leadership is contagious and the players are already opening their heart to share his slogan.

“He has charisma, but at the same time, he is also trying to be understanding of us,” Kim said.

He is also eager to teach basic strategies in quick, effective manners. Beating expectations, he trained the players hard from the beginning, using many methods which were unfamiliar to the team.

One of them was “defense balance training,” in which he taught the players how to find a good defensive position without breaking a 4-2-3-1 formation. A set-piece training is another he is focused on. Hong proved that he is good at it during the London Olympics, when he coached Korea to a bronze medal. He is planning to complete two or three different set-piece tactics before the East Asian Cup, according to his staff.

Another key to his management is the selection of the players.

Hong is not known for favoritism and has tried to select players based on their abilities plus their conditions on the playing day, according to those who know him well. Seigo Ikeda, who helped Hong during the London Olympics in the selection process for the players, will also help him for the East Asian Cup.

Many of the players in the London Olympic squad told Ilgan Sports that Hong and Ikeda are objective, so no players were dissatisfied regarding their selection.