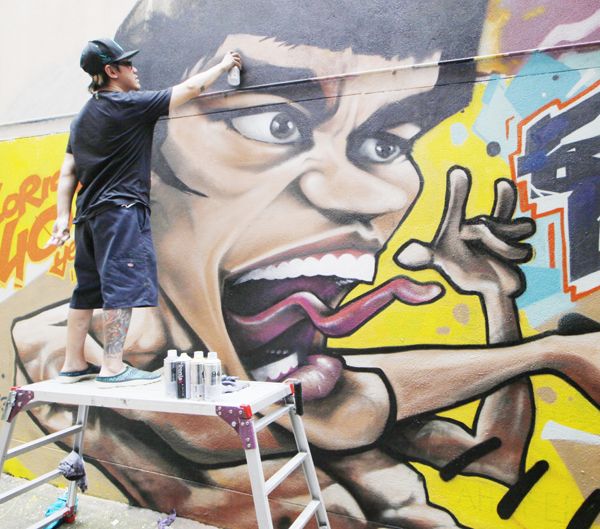 An artist, “Uncle,” paints graffiti of the late Hong Kong kung-fu star Bruce Lee on a wall outside a gallery to mark the 40th anniversary of the death of Lee, in Hong Kong, on Tuesday. Lee died on July 20, 1973, and his memorial exhibition will be held at Hong Kong’s Heritage Museum organized by the government.[AP/NEWSIS]

HONG KONG - Late kung-fu superstar Bruce Lee may be an international icon, but he is still not the complete local hero in Hong Kong.

Fans are marking his death 40 years ago this weekend with art gallery shows, exhibitions and even street graffiti but some people are urging Hong Kong’s government to do more to honour the former British colony’s biggest star.

Lawmakers and scholars have joined calls from fans, fearing the government is wary of fully embracing Lee’s legacy. His enduring spirit of youthful rebellion and a willingness to fight big oppressors may have spooked city leaders prone to second-guessing their political masters in Beijing.

“The Hong Kong government or the people on top of the governing body are not thinking, first of all, in terms of Hong Kong people’s mind-set,” said Lo Wai-luk, an associate professor in the Academy of Film at Hong Kong Baptist University.

“They think of how to do something to please the main Chinese government, or not to violate” what they think Beijing likes, he said.

American-born but raised in Hong Kong, Lee died of brain swelling aged just 32 at the height of his fame. His most popular film, the worldwide blockbuster Enter the Dragon, was released just six days after his death in 1973.

The government did not respond to Reuters questions but in recent statements it has outlined a number of officially backed efforts to mark the anniversary.

It has supported a five-year exhibition, due to be opened on Friday by the city Financial Secretary John Tsang at a museum. The government film archive is also producing documentaries of his life and new prints of some of Lee’s films.

But some fans feel the government is simply making up for lost time and they are angry about the lack of a permanent memorial or museum to honour Lee.

A member of the city’s Legislative Council questioned officials over their failed negotiations two years ago to buy and restore Lee’s former mansion in the upscale Kowloon Tong suburb to create a museum devoted to him.

Gregory So, Hong Kong’s secretary for commerce and economic development, acknowledged Lee’s “tremendous contribution” to martial arts and cinema and the deep international and domestic interest in his life. But he said there were no plans to re-open negotiations on taking over Lee’s old home.

Some fans are happily taking matters into their own hands.

Amid the bustle of the business and entertainment district of Wanchai, a graffiti caricature of Lee marks the entrance to an alley that leads to an art gallery. Renowned avant-garde artists have attempted to capture his fighting spirit in paintings that line the walls.

“At that time, Hong Kong people were so skinny, so as teenagers we were surprised he had a very strong body,” Chow said. “He also worked very hard and showed a lot of confidence to the public.”

Posters and T-shirts of Lee in his famous battle stance, scars torn across his muscled torso, remain hot items in markets.

Other fans will lay wreaths on Saturday at the foot of a statue of Lee, in full kung-fu flight, on the Kowloon waterfront.

“They have always used him when promoting the city abroad but have never done anything in honour of him.”