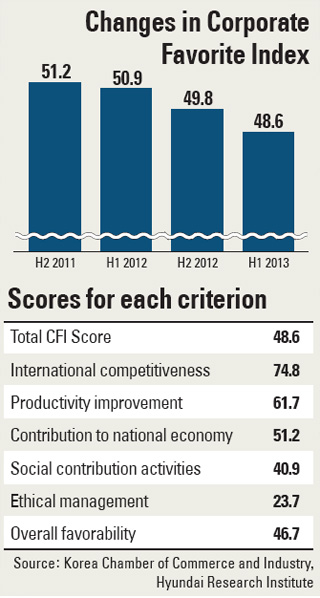 The public’s view of corporations has continuously deteriorated since the second half of 2011 to fall short of the moderate favorability level of 50 points, the Korea Chamber of Commerce and Industry (KCCI) and Hyundai Research Institute said yesterday.

The CFI reflects the level of favorable feelings toward corporations as measured by contribution to national economy, management ethics, productivity, competitiveness in international markets and contribution to society, according to the KCCI.

The closer to 100, the more favorable the opinion of those surveyed.

Looking at the changes in scores for CFI criteria compared to the second half of last year, overall likability went from 48.1 to 46.7, competitiveness in the international market from 79.6 to 74.8, and productivity and technology from 63.4 to 61.7.

Views toward management ethics improved from 22.9 to 23.7 points, contribution to national economy from 51 to 51.2 and social contribution from 40.8 to 40.9 when compared with last year’s results.

When asked whether the country’s antibusiness sentiment is high, 66.5 percent of those surveyed said yes. However, when asked if corporations are the largest contributors to the national economy, 74.7 said yes.

“The CFI has not been improved significantly for the past few years. Along with growing interest in ethical management, companies should make more of a commitment to social responsibilities,” said Jeon Su-bong, general manager of research at KCCI.