From regal court, embroidery with an intricate touch

From regal court, embroidery with an intricate touch 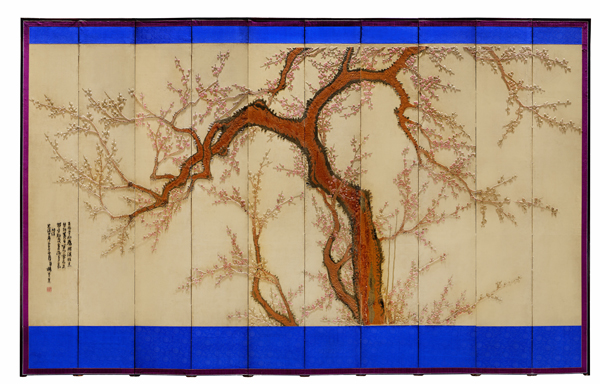 Embroidery during the Joseon Dynasty (1392-1910) wasn’t a mere hobby for rich female aristocrats. It was a profession, and there was a whole “bureau” dedicated to it within the royal court.

The National Palace Museum of Korea is presenting a special exhibit on embroidery from the royal court of the Joseon Dynasty. Titled “Artistic Court Embroidery,” the exhibit examines embroidered art created by the women of the so-called Joseon Royal Court Embroidery Bureau.

“There have been exhibitions and conferences about the topic in privately run museums, but this is the first time a national museum has put on such an exhibit,” says Park Yoon-hee, a researcher at the Palace Museum who is overseeing the exhibition.

The museum is displaying a variety of embroidered items that range from intricately decorated dresses to decorative screens depicting idyllic nature scenes to the decorative caps sewn onto the ends of pillows.

Among about 90 items on display, one that immediately catches the eye is “Princess Bok-on’s Wedding Dress.” Made in 1830 for the wedding of the second daughter of King Sunjo (1790-1834), the deep red silk dress has fruits and flowers embroidered along the sleeves, shoulders and hem. The entire back of the dress is also embroidered, although it will not be visible to visitors.

“It was specially made so that the wearer would be the center of attention,” said Park. “Especially since it was being worn by a princess.” 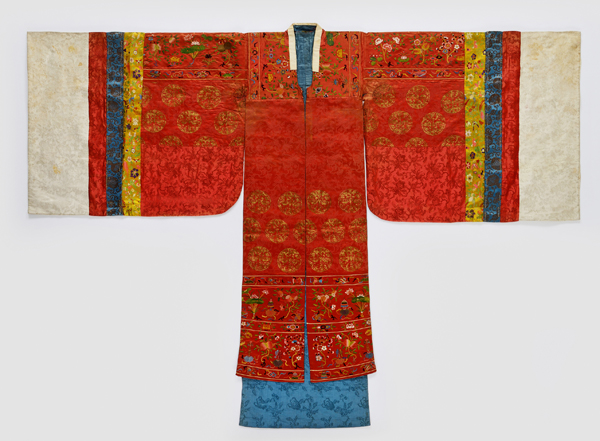 Another attention-grabbing item is a decorative folding screen depicting red-crested cranes standing under a pine tree that was made sometime in the late 19th or early 20th century. It is an example of a common theme in Korean art that symbolizes longevity, as it was believed that cranes and pine trees could live for thousands of years.

Some people might be surprised to see pillow caps embroidered with the taegeukgi, or South Korea’s national flag, although it is stitched in a much more colorful manner than the modern version we know today. The design was created in the late 19th century and adopted as the flag of the Joseon Dynasty. The two Koreas adopted different versions of the traditional design as their national flags after World War II, although North Korea switched to their current flag soon afterward.

The exhibit also contains some examples of contemporary embroidery from China and Japan. Embroidered screens from these countries were used as decoration in the royal chambers. Many photographs of the royal family were taken using these imported screens as a backdrop.

Korean embroidery during the Joseon Dynasty was unique in the region, as it was not created with commercial sales in mind. As a result, it developed in a different manner.

“Because [Chinese and Japanese] embroidery was created with the intention of being sold, there was a focus on beauty. On the other hand in our country, commercial sales of embroidery were not seen until the late 19th, early 20th century,” said Park Yoon-hee. “Unlike commercial embroidery, you can see more mundane subjects and pictures [in Korean embroidery].”

Embroidery was also an important avenue for women of the Joseon royal court who created the items on display. It was one of the few artistic fields in which they were allowed to participate, as men had a monopoly on the other arts, such as literature and painting, especially in the latter part of the conservative Joseon era.

“Our famous painters [in the history] are all men,” says Park, adding that most traditional Korean art during the period was created and appraised exclusively by men. “But needlework and embroidery were the domain of women. Women were able to show their artistic abilities through embroidered objects, so that is why embroidery was important for women.”

“Artistic Court Embroidery” runs until Sept. 1. Admission is free. The National Palace Museum of Korea is located right by exit No. 5 of Gyeongbokgung Station, subway line 3. The museum is closed on Mondays.