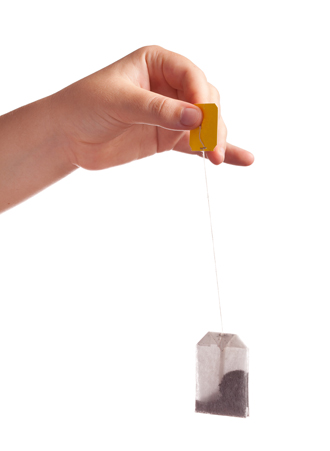 Kim Geun-ja has owned and run a green tea house in Insa-dong, central Seoul, for 15 years. Called Samhwaryeong, or “three flowers on a hill,” her shop dedicated to the most Korean of drinks has had its ups and downs, but these days, business is almost all down. The culprit: coffee.

“It seems like a chain reaction,” said Kim. “As the consumption of green tea has dropped, many are suffering. People who make the pottery [for green tea] are struggling and the overall quality of green tea leaves has fallen, too. Since many green tea farms have been abandoned, the quality is not as good as it used to be.”

Kim steeps the green tea herself for the clients at Samhwaryeong, which is located in a small hanok, or traditional Korean house, but her main business is selling the associated pots and other teaware that go with making tea.

In fact, Korea’s interest in green tea has declined so badly that many green tea farms in Boseong, South Jeolla, one of the prime green tea-growing regions, are now deserted. This reporter saw next to no one picking leaves on a recent visit to the region, and many leaves had turned yellow-brown on the branches from neglect.

Parking lots were almost empty, without any travelers in sight, which is a dramatic change compared to a couple of years ago when the farm was packed with tourists.

Scenic green tea farms, with rolling, verdant hills, were once featured in numerous TV commercials and fashion spreads, spurring interest in the tea farms from plenty of local and foreign tourists.

“Because of coffee, green tea is completely forgotten,” said Ju. “We often say coffee is a bigger threat than cold spells or diseases.”

It’s not surprising, then, that green tea has suffered. According to data collected by three big-box chain stores, E-Mart, Lotte Mart and Homeplus, green tea products brought in 166.7 billion won ($144.9 million) in sales in 2004. But by 2012, that had fallen to just 66.3 billion won.

Another official from the Ministry of Agriculture, Food and Rural Affairs noted that major green tea producers in Hadong, South Gyeongsang, and Jeju are also giving up on cultivating their crops.

Once these green tea fields are neglected and allowed to fall into decay, there is little chance of reaping quality leaves in the future. 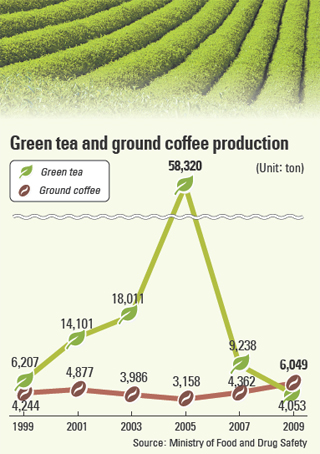 Green tea came into prominence back in 1990s with the rise of the “well-being” craze, as Koreans became affluent enough to care about what they eat and drink. Thanks to the health benefits of green tea, which is widely thought to be effective in preventing some cancers and obesity, the production of green tea soared.

With surging demand, there was even a huge amount of green tea imported from China in the late 2000s - although when some Chinese tea was found to contain agricultural chemicals, green tea’s reputation in general was tarnished.

“Green tea lost credibility and that was around the time when coffee chains from overseas landed in Korea, one after another,” said Oh Mi-jeong, a professor of College of Life Science at Korea University.

Another factor which turned consumers away from green tea, experts say, was the complicated process of green tea brewing.

In order to stay alive, local green tea producers, academics, and experts have been working on solutions.

Boseong plans to promote the health benefits of green tea even further.

“The obesity rate in Boseong County is the lowest among all local counties,” said Boseong County Governor Jeong Jong-hae. “That is because green tea contains high levels of antioxidants and it is excellent for reducing obesity and cholesterol in the blood.”

Green tea producers are also trying to diversify their products.

“We’re planning to launch green tea-based products such as green tea-based chocolate, sugar and candies,” said Jang Ki-sun, the head of Daehan Dawon in Boseong. “We’re also working on a new type of green tea mix that can easily be used to make green tea lattes.”

Lee Jae-sung, who owns Seungseol Green Tea Farm in Boseong, says that many farms are now using more ecofriendly farming methods, without harsh chemicals. “We also try to promote these green tea farms as a place where people can take a break and experience tea making for a day,” said Lee.

Amore Pacific’s green tea brand, O’sulloc, which has its own green tea farm in Jeju and green tea cafes across the nation, says the green tea industry should take a different approach.

Amore Pacific has a long history with green tea, having started cultivating the leaf back in 1979. Ever since then, the green tea products of Amore Pacific have taken the largest share in the local market.

But when the company looked to expand in 2004, it took a sophisticated approach, launching the O’sulloc Tea House, a street cafe brand which offers specialty green tea along with green tea-based desserts, from roll cakes to green tea smoothies.

When asked whether the coffee boom affected O’sulloc Tea House sales over the recent years, Park Hyun-min, a public relations official at Amore Pacific, said no. “It is true that the nation’s tea industry is growing slowly, but we try to offer various tea products and tea culture by catering to the needs of young consumers,” said Park.

“There are simply too many things to drink these days. So we decided to approach consumers by appealing to their emotions.”

One effort of O’sulloc Tea House has been a series of blended teas. Instead of plain green tea, the tea house offers variations, by mixing one with another. One of the blended teas is called Jeju Island Dream Green Tea. Themed with the four seasons of Jeju Island, the blended tea mixes camellia and rape flowers grown in Jeju into the green tea.

“By developing various offerings, we want our customers to get access to tea drinking as one pleasant experience and culture,” added Park.

The tea house O’sulloc saw 25 percent sales increase in the first half of this year compared to the same period a year ago.