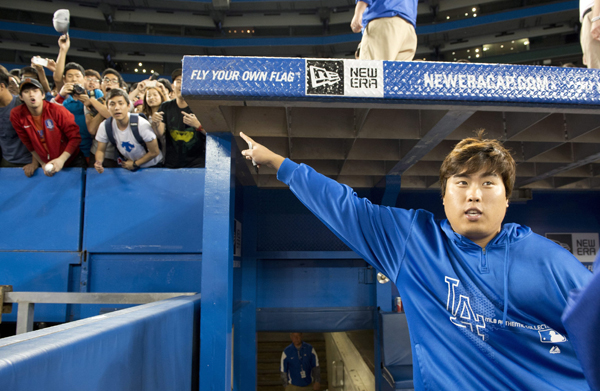 Los Angeles Dodgers starting pitcher Ryu Hyun-jin signs autographs for fans after earning his eighth win of the season against the Toronto Blue Jays on Monday. He gave up four runs and nine hits in five and one-third innings. [AP/NEWSIS]

TORONTO - A.J. Ellis isn’t about to give opposing pitchers a chance to catch their breath at the bottom of a tough Dodgers lineup.

Ellis hit a two-run homer and drove in a career-best five runs, Ryu Hyun-jin pitched five and one-third innings, and Los Angeles set a season high in runs with a 14-5 win over the Toronto Blue Jays on Monday night, their fourth straight victory and 21st in 26 games.

Ellis went deep in the second inning and had RBI singles in the third, sixth and seventh. He also reached on first baseman Adam Lind’s fielding error in the fourth.

“He’s just consistent,” manager Don Mattingly said. “He gives you good at-bats all the time. It’s not always hits, but you’re always going to get a quality at-bat from A.J. He’s a guy who knows what he’s doing up there.

Batting after big names such as Yasiel Puig, Adrian Gonzalez and Hanley Ramirez, Ellis said it’s important to keep the pressure on.

“When it gets down to the bottom to me and Juan Uribe and Mark Ellis, you can almost see the pitcher trying to take a breath, like it’s a break for them,” Ellis said.

“It’s our job to make it tough and not let them take advantage if there’s a little bit of a letdown because it’s hard to go through eight or nine hitters with that max intensity.”

The seventh hitter, Skip Schumaker, added a three-run shot as the Dodgers moved a season-high four games above .500 and won their eighth straight road game, their longest streak since a nine-game run in July 2004.

“We have a deep lineup,” Gonzalez said. “If you can just stay within the zone, it’ll be really tough on the opposing pitcher.”

Toronto made a season-high five errors and lost its fifth straight game. The Blue Jays have lost 12 of 16 overall.

“It wasn’t a very good game,” Blue Jays manager John Gibbons said. “We got whipped all the way around.”

Ryu (8-3) had gone 4-1 with a 2.25 ERA in 10 starts before matching a season worst by giving up five runs in five innings at Arizona on July 10. He was better against the Blue Jays, allowing four runs and nine hits, all singles. Ryu walked two and struck out three.

“He knows how to win,” Ellis said. “He pitched great with a lead tonight and kept the ball in the ballpark. He did what he was supposed to do and that’s win the game.”

Ryu had not pitched since that game against the Diamondbacks, an 11-day break.

“It seemed like his command was a little bit in and out,” Mattingly said. “I almost feel like (the long layoff) was a detriment. It maybe rested him, but I felt like it was a little bit of a detriment to him as far as being sharp with his breaking stuff.”

A large group of Korean fans cheered when Ryu’s name was announced before the game, and again when he walked in from the bullpen. Waving flags and chanting, they kept up the noise through much of his outing.

“That was definitely more than I expected here in Toronto,” Ryu said through a translator. “I was very appreciative of that; it was a big help for me.”

The Dodgers played without outfielder Matt Kemp, who is expected to miss the three-game series with a sprained left ankle. X-rays on Kemp were negative.

“We’ll see how it looks tomorrow, if it’s any better,” Mattingly said.

Kemp came off the 15-day disabled list Sunday after sitting out 11 games with a sore left shoulder. He went 3 for 4 with a home run in a win over Washington, but limped off after sliding into catcher Kurt Suzuki on a force play in the ninth.

Puig started in center Monday and Andre Ethier was the DH. Mattingly said Ethier would likely return to center for the next two games.

The Dodgers roughed up Blue Jays starter Josh Johnson, who was charged with five runs and seven hits in two-plus innings. He walked one and struck out two.

“I was pitiful,” Johnson said. “It’s the only way I could put it. I didn’t even battle them. Everything was in the middle of the plate.”