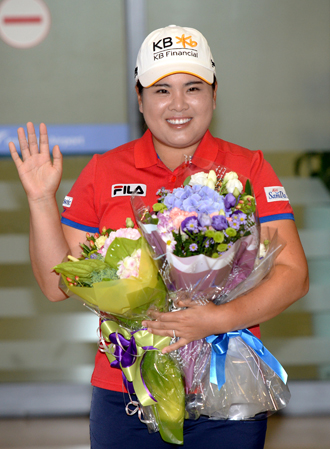 World No.1 golfer Park In-bee poses at Incheon International Airport, yesterday. Park is aiming to make history at the British Open, which begins on Aug. 1. [NEWS1]

With three majors in hand already this year and the British Open approaching in a week, Park In-bee admitted yesterday that she is feeling the burden of achieving a potentially historical Grand Slam, but will try to take all the hoopla in stride.

The world’s No. 1 woman golfer came to Korea yesterday for a five-day break before she leaves for Scotland, where she will attempt to become a legend at the age of 25.

After winning the first three majors this season, Park will enter the British Open, where, if she wins, she will become the first golfer in the world, male or female, to win four majors in a single year - a feat many in Korea call a “calendar Grand Slam.”

The definition gets hazy this year, as the LPGA is starting a fifth major, the Evian Championship, in September.

Regardless of what people call it, Park’s accomplishments are already the best showing by a Korean golfer in a single year. She has had six victories this year, one more than what Hall of Famer Pak Se-ri won in a single year, in both 2001 and 2002.

“Even if I don’t win a major in the second half of the year, I am satisfied with the results that I have achieved this season so far,” Park told reporters upon arriving at Incheon International Airport yesterday.

“I did really well this season. Initially, my goal for this year was to become the No. 1 player in the world, but I never thought about winning a Grand Slam.”

Park won the U.S. Open on June 30, although she fared less well at two lesser events since then - she tied for 14th at the Manulife Financial LPGA Classic on July 14 and 33rd at the Marathon Classic last Sunday.

“I will do my best for the remaining events, though,” Park said. “It is true that pressure is mounting as I go through more majors, but so far I am adapting to it, I guess. I will try to play without feeling pressure.”

Park will stay in Korea until Sunday. The British Open begins Aug. 1.

While Park has never won a British Open before, she has been improving in recent years, going from a tie for 25th in 2009, to sixth in 2010, and a tie for third last year.

However, this year the event returns to Old Course at St. Andrews. When she made her British Open debut here in 2007, she failed to make the cut.

“The thing is weather,” Park said. “If weather is good, you could have good scores. If it is windy and rainy, it will be really difficult.”

Park said that she will try to be consistent regardless of weather. “Whether weather is good or bad, you need to play well. No matter what circumstance you find yourself in, you have to adjust to it,” she said.