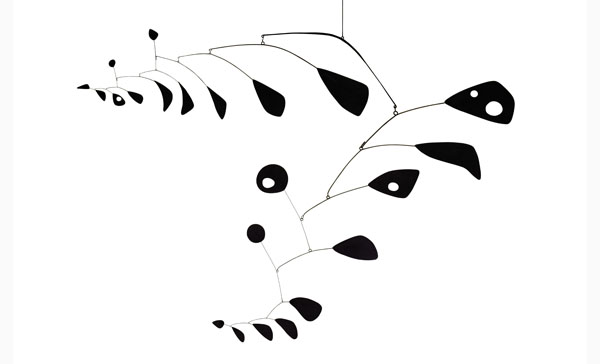 Alexander Calder(1898-1976), the creator of sculptures hanging and moving with the air, called “mobiles,” is familiar to Korean art lovers, as there were several shows of his works in recent years. Still, the ongoing retrospective of the American artist in Leeum, Samsung Museum of Art has some fresh quality in the number and diversity of the works on display.

In this “largest-ever retrospective of Calder in Korea,” according to the museum, the 118 pieces in the exhibit include not only the artist’s mobiles in his signature style, but also his wire sculptures and abstract paintings made in his early years and his early mobiles, which do not hang from the ceiling.

Among the exhibits are also the artist’s immobile sculptures called the “stabiles” and giant outdoor sculptures in which the characteristics of the mobile and stabile are combined.

The wire sculptures of animals and circus acrobats in dynamic poses, which Calder made in his late 20s, are particularly impressive. Made of only a few lines of wire, the sculptures express the characteristics and dynamism of the subjects concisely and clearly. 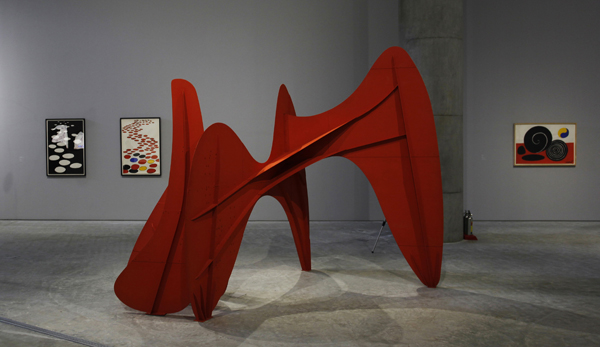 “La Grande Vitesse” a one-fifth scale model of Calder’s public sculpture of the same title in Grand Rapids, Michigan, is installed in Leeum. Provided by the museum

“Calder presented the sculptures in Paris and attracted the attention of important artists there, who called his works ‘three-dimensional drawing,’” explained Tae Hyun-sun, curator of the exhibition.

The “3-D drawing” seems to be a proper description for Calder’s wire sculptures, as they look like what a skillful calligrapher might dash off in the air with a single stroke of a brush. In addition, when a viewer walks around each of the sculptures, they can see “a drawing” change from moment to moment.

The idea of “3-D drawing in space that changes at every moment” finally developed into the mobile. The mobile’s image subtly changes along with its movement in air currents, even when a viewer stays in one place.

From top, “Circus Scene” (1929), Calder’s wire sculpture, “Object with Yellow Background”(1936), a half-painting and half-sculpture and “Louisa’s 43rd birthday present” (1948), a set of miniature sculptures he had made for his wife Louisa, are part of the exhibits. ⓒ 2013 Calder Foundation, New York/ Artists Rights Society (ARS), New York

“Calder’s works are made not only of wire, steel and paint, but also of space and time,” said Alexander S.C. Rower, president of the Calder Foundation and grandson of the sculptor, during his visit to Seoul last year.

He recently visited Seoul again for the retrospective.

Rower also said, “Calder was interested in energy flows between objects and in the universe.”

This is consistently visible in the artist’s early mobiles that do not hang from the ceiling, such as “Croisiere,” which brings up the image of a moving celestial globe, and later mobiles suspended in the air such as “Scarlet Digitals” and “Le 31 Janvier.”

“The various objects of the universe may be constant at times, but their reciprocal relationships always vary,” Calder said in 1932, according to the Calder Foundation. In that year, the artist began to design mobiles to be suspended from the ceiling.

“We notice the movement of automobiles and beings in the street, but we do not notice that the earth turns,” he continued. “As truly serious art must follow the greater laws, and not only appearances, I try to put all the elements in motion in my mobile sculptures.”

Surprisingly, it was not Calder who coined the word “mobile.” It was French Dadaist Marcel Duchamp, who is now regarded as the progenitor of conceptual art with the biggest impact on contemporary art.

“Duchamp gave the name to Calder’s early sculptures with two or three-cycled motions by motors and cranks,” Tae said. “After hearing that, Jean Arp, another famous artist, proposed to Calder that he call his immobile sculptures ‘stabiles.’ Though the proposal had some sarcastic tinges, Calder accepted the name with pleasure.”

Among the stabiles on display in the Leeum retrospective is “La Grande Vitesse,” a one-fifth scale model that Calder made for a giant public sculpture of the same title, on the city hall plaza in Grand Rapids, Michigan.

Even though the sculpture is a stabile and not a mobile, its curved lines can be easily associated with the wild waves and speed of rapids, in accordance with the work’s title inspired by the city’s name.

“Public sculptures were in boom in America in the 1960s,” Tae said. “Calder’s works were actively sought after, as their vivid colors and dynamically curved lines made vibrant contrasts with the neighboring buildings of straight lines and achromatic colors prevalent at that time.”

Among other impressive works on display is “Object with Yellow Background,” a half-painting and half-sculpture. It seems to be influenced by Spanish surrealist Joan Miro, one of Calder’s friends.

“Louisa’s 43rd birthday present,” a set of cute miniature mobiles Calder made for his wife, is another must-see.