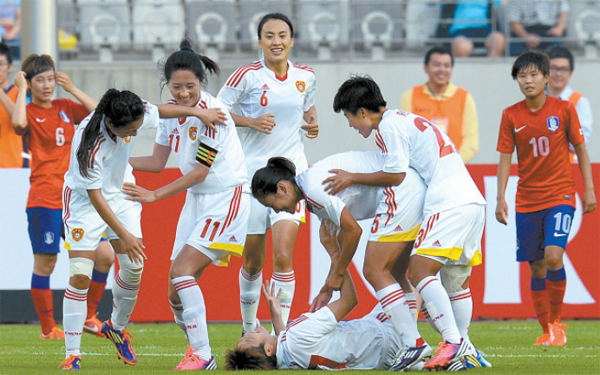 Li Ying, lying down, and her teammates celebrate after Li scored China’s second goal against Korea at the East Asian Cup in Hwaseong, yesterday. [NEWS1]

Kim Na-rae netted a 35-meter (114.83-foot) cannon shot in the 9th minute, eroding China’s early lead earned by Wang Lisi, but Li capitalized on a melee in front of Korea’s goal in the 67th minute, giving China its first victory at the four-nation competition.

It was the second loss for Yoon Duk-yeo’s squad, who lost to North Korea, 2-1, on Sunday. Korea will try to avoid a last-place finish with one last match, a difficult one. It will face off against Japan, ranked No. 3 in the world by FIFA, in Seoul on Saturday. China will play its final match against North Korea on Saturday.

With the loss, the Korean women’s team, ranked 16th, extended its lopsided record with 17th-ranked China. It has won only three times in 29 matches since 1990. Yesterday’s loss was Korea’s 22nd loss to China. The two countries drew four times. Korea beat China twice during the 2010 Guangzhou Asian Games, but it lost to China, 2-0, in a friendly in January.

Yoon’s squad, which boosted its confidence with Sunday’s close match against the ninth-ranked North, entered the China game at Hwaseong Sports Complex determined to turn the tables, but only two minutes into the game, Wang, a 21-year-old Jiangsu midfielder, converted a Wang Lingling cross into the net.

Korea was quick to respond and Kim, 23, leveled the score, connecting a deflected ball into a 35-meter-long right-footed volley, which goalkeeper Wang Fei was only able to touch before it struck the net. It was her first goal for Korea in three years. The Suwon FMC midfielder came close to scoring her second in the 21st minute when she converted a Jeon Ga-eul corner kick but goalie Wang was able to save it this time.

Korea kept up its aggression in the second half, threatening to score several times, including in the 48th minute by striker Ji So-yun. The INAC Kobe Leonessa striker, who scored six goals for the Japanese club this season, had a one-on-one chance with goalie Wang, but Wang took away the ball.

China took control midway through the second half and Korea goalie Kim Jang-mi punched out a strong shot at a crowded box in the 67th minute, before it was deflected to Li, who tapped the ball into the right-hand side of the net.

Forward Yoo Young-a tried to level the score when she beat a defender after a superb dribble alongside the left wing and kicked the ball between two defenders but Wang again saved it.

Launched in 2005, the Women’s East Asian Cup is a four-nation competition. Korea won the inaugural event while Japan won in the next two events, in 2008 and 2010. North Korea finished runner-up twice in 2005 and 2008. China’s best result is a second-place finish in 2010.