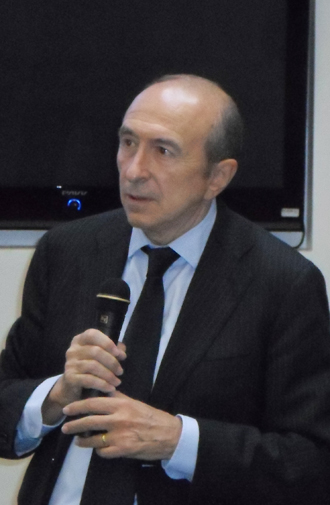 Gerard Collomb, the mayor of Lyon, France, led a 40-member business delegation to Korea on Friday to boost economic and cultural cooperation with Korean companies as part of a massive urban renovation project in the French city.

The project, set to be completed by 2024, includes the construction of a train station, a shopping center and office buildings in the Part Dieu region, a major French business center and metropolitan hub.

The train station, which would be one of Europe’s largest, would directly connect the area to international destinations such as Brussels, Frankfurt, London and Barcelona via high-speed trains.

The Korean telecommunications company KT has signed a first letter of intention with France’s second-largest city to participate in the project.

“I have been deeply impressed by KT’s state-of-the-art ICT technologies and capabilities,” said Collomb.

“After the first innovative partnership with the Japanese NEDO for the Confluence Urban Project [called Lyon Smart Community], we are very happy to start for the Part-Dieu project collaboration with KT, one of the most innovative international companies,” he said.

Collomb added that the cooperation can be expanded into other areas if the urban project is successful.

KT will be tasked with establishing a “smart” infrastructure, which will deploy a smart grid and mobile commerce technology. A smart grid is an electricity network based on information and communications technology.

“It is a great opportunity for us to reinforce our European presence by starting a collaboration with a metropolis recognized as a model in terms of smart city strategy” said Bahk Jun-sick, the head of KT’s Global Business Unit.

He added that KT will work with other French companies.

“We will build a strong alliance with other sectors in French companies such as Schneider Electric, Bouygues and Alstom,” Bahk said.

In addition to the improved commercial ties with Korean firms, Lyon seeks to promote cooperation and exchanges in robotics, artificial intelligence and green growth.

The French city is known to have invested heavily on robotics in recent years, seeking cooperation with Korea in the area.