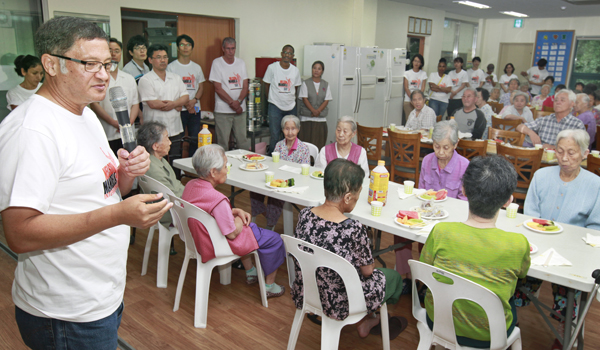 On Nelson Mandela’s 95th birthday last Thursday, South Africa’s chief envoy to Seoul and his staff loosened their ties, rolled up their sleeves and “gave back” to society for 67 minutes in honor of Mandela’s 67 years of public service.

South African Ambassador Hilton Anthony Dennis and his embassy colleagues donned matching T-shirts and scrubbed down the Seoul Metropolitan Government’s Surak Old People’s Nursing Home at the foot of Mount Surak in Nowon District, northern Seoul. After mopping and wiping down the cafeteria, they served fruits, rice cakes and drinks to the residents of the nursing home, which is home to some 70 old-age pensioners ranging in age from their late 60s to 99.

Many seniors learned for the first time that the United Nations celebrated the birthday of the former president in such a way. The UN has designated July 18 Nelson Mandela International Day and encouraged people to do charitable work that day for at least 67 minutes. Mandela was readmitted to the hospital early last month in critical condition for a reoccurring lung infection.

“The intention by the United Nations is to both honor and recognize Mandela for his rare qualities and achievements and also offer this life experience and values he represents to the whole world because it is considered a good example of a way to live one’s life based on certain principles,” Dennis told the Korea JoongAng Daily earlier last week.

“The calculation is that Nelson Mandela gave 67 years of his life for the public good, for humanitarian purposes, and of those years, almost 30 were spent in jail,” said Dennis, “All for a noble cause.”

“Of all the countries in the world, we are probably one of the most diverse,” said Dennis. “And what Mandela represents is these ideas that hold our society together: A nonracial, nonsexist, democratic South Africa.”

Choi Kyung-ja, 67, one of the youngest senior citizen at the nursing home, said, “I respect Mandela and know South Africa because of him.”

Like Choi, many Koreans, even elementary students, hold Mandela in high esteem.

Though the country has advanced a great deal since the end of the 1950-53 Korean War, Dennis recalled, “Korea was a rural country decades ago, and it is the old people who built the foundation of the country.” His words were met by a round of applause from the elderly residents, many of them who do not receive visitors.

Mandela led the country’s transition from apartheid rule to democracy, and served as the first black and freely-elected president from 1994-98. He spent 27 years in prison.

The average age at the nursing home is 85 years, and 11 of the residents are in their 90s, which is “a testament to Korea becoming an increasingly aged society,” said Lee Kyung-hee, a manager at the home.

Leading up to the Mandela Day celebration, the South African Embassy hosted a high school essay competition on the subject of Mandela, and Dennis emphasized the importance of the young generation taking the time to give back to society.