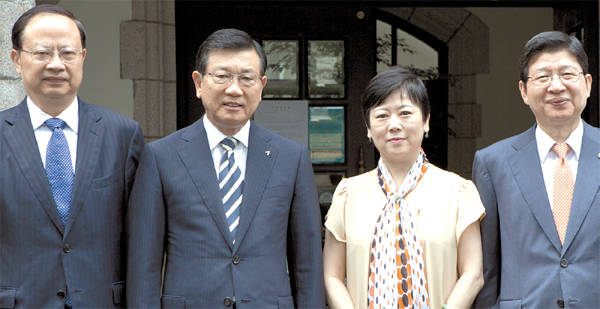 Kumho Asiana Group Chairman Park Sam-koo, second from left, and Li Xiaolin, president of the Chinese People’s Association for Friendship With Foreign Countries, third from left, pose at Yonsei University in Seoul yesterday after an event exploring the Korea-China relationship. Park has led the friendship association since 2005. Asiana Group sponsors various events in China, including funding a Korean speaking competition to improve the images of the two countries. Before the event, Park apologized to Chinese delegates for the Asiana Airlines crash earlier this month in San Francisco that killed three Chinese girls. Provided by the company