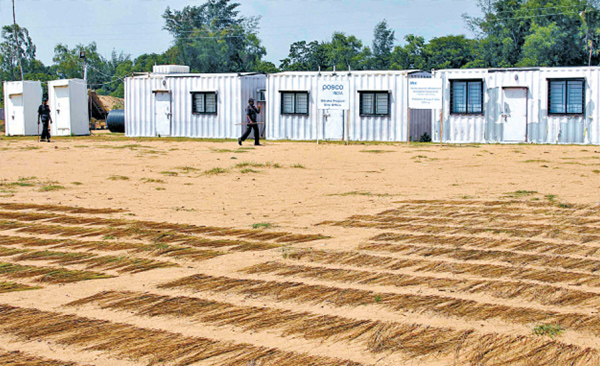 Security guards patrol the Posco India Odisha project site in this October 2012 file photo. Some investors feelings with the Korean steelmaker are starting to sour on a long-delayed 12 billion dollar project for a steel mill in India. [REUTERS/NEWS1]

The average of 10 analyst estimates was 554.7 billion won, according to data compiled by Bloomberg. Sales declined 5 percent to 15.6 trillion won.

“Prices have remained weak for a long while,” Im Jeong-jae, a Seoul-based fund manager at Shinhan BNP Paribas Asset Management, which oversees about $32 billion, said before the announcement. “That is a major reason why investors hold a conservative view on the steel sector.” 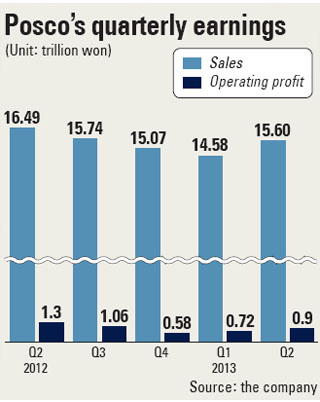 Posco’s average selling price dropped 13 percent to 808,000 won a metric ton in the second quarter from a year ago, Hong Jin-joo, an analyst at Shinhan Investment, estimated in a June 11 report. Prices probably rose from 782,000 won in the first quarter, according to the report.

Steel prices in China, the world’s biggest producer and consumer of the alloy, may gradually recover after bottoming out in the third quarter, the Korean company said.

Posco forecast world steel demand will probably grow 3 percent this year, helped by “solid” growth in emerging markets. That is in line with the World Steel Association’s estimate of 2.9 percent announced in April.

Posco accounted for 55 percent of the market in 2012 in terms of crude output of the metal, a company filing showed in March. The company was the fourth-biggest in Asia by 2012 output, according to latest rankings posted by the World Steel Association.