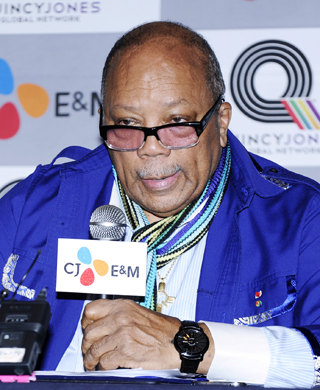 Over Quincy Jones’ seven decades in the music business, he has worked with an endless list of greats: Miles Davis, Stevie Wonder, Michael Jackson and countless more. But today, Jones has a new musical love: K-pop.

At a press conference in Seoul on Thursday, Jones talked of going to a K-pop concert in Anaheim, California recently and being amazed. “Unbelievable,” Jones said. “It was just one of the most incredible performances ever.”

The 80-year-old Jones was in town for his first ever concert in Korea, held Thursday at the Olympic Park in southern Seoul, in a performance that combined Western performers like Patti Austin and James Ingram with leading Korean artists, including Tiger JK and Yoon Mi-rae.

“They’re really beautiful people,” Jones said of Tiger JK and Yoon, who are married. “He’s been to my home three times. I feel like family with them.”

Jones is big on K-pop these days, saying that the success Psy had with “Gangnam Style” was bigger in America than other international stars of the past, such as Sweden’s ABBA or France’s Johnny Hallyday. “Psy had that special connection,” Jones said.

“There’s is a sensibility here I have not found in Japan, China or Vietnam,” he said.

With 27 Grammy awards and 79 nominations, Jones is the most awarded musician in the Grammy’s history. Michael Jackson’s “Thriller,” which Jones produced, remains the biggest-selling album in history, with 110 million copies.

“When I first came here last time, I felt like I was back home in Chicago. They [Koreans and Americans] have an emotional connection, musical connection, conversation connection.”

Jones is so bullish in Korean pop music that, at the press conference, he announced a deal with CJ E&M, Korea’s largest entertainment company, to produce and promote K-pop internationally, as well as help talented musicians at the Berklee College of Music.

During the press conference, Jones also expressed strong concern over the damage done to the music industry by online piracy.

Jones said that “music and water is the last thing on the planet you can’t live without,” and stressed that piracy could “cause an end to the music industry.”