Pyeongchang 2018 on the horizon

Pyeongchang 2018 on the horizon 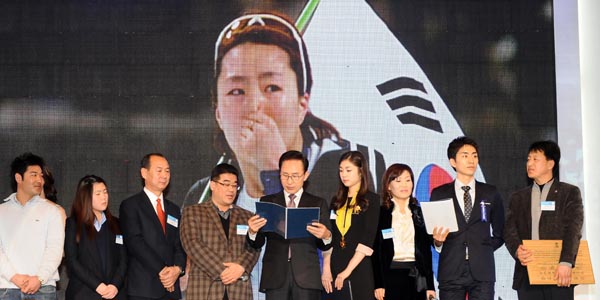 At first glance, Olympic champion Usain Bolt may not appear to have much in common with musical superstar Justin Timberlake. But there is at least one thing they share: both have thrilled visitors to London’s Olympic Park - a connection that hints at the transformative power of the Olympic Games.

A year has passed since the 2012 London Games captivated a global audience and raised spirits throughout Britain, but the legacy of those 17 days continues to deliver lasting benefits. For Londoners, the July 27 anniversary of the opening ceremony was not just a time to relive exciting memories; it was an opportunity to celebrate the many improvements that the Games helped produce.

For these Games were not just about a couple of weeks of incredible sporting endeavour. The Olympic Games, wherever they take place in the world, are a focal point for long-term changes, not only in a sporting sense but also in terms of economic and social regeneration. It is a crucial factor to which all future Olympic host cities - including Pyeongchang 2018 - are encouraged to pay close attention from the outset of the bid process.

Pyeongchang, for example, produced a very strong vision during its bid to host the 2018 Olympic Winter Games - New Horizons - which looks to extend the spirit of the Olympic movement and winter sports to Asian countries, where winter sports remain relatively underdeveloped compared to other regions of the world. It also aims to provide greater opportunities for the young people in those countries to participate in winter sports. This is why we are pleased to see that Pyeongchang is continuing with its “Dream Program,” an annual winter sports youth festival that invites young people from tropical and developing countries to get a taste of winter sports activities that they might otherwise not have the opportunity to experience. We believe it will be a strong legacy of the Games.

The International Olympic Committee (IOC) and Pyeongchang 2018 have embarked on a marathon, not a sprint, and over the next four-and-a-half years, we will work closely with the organizers to develop their vision into a reality.

London’s success in using the Games as a catalyst for positive change shows what can happen when good intentions are matched by good planning. The London experience is particularly instructive amid the current debate over the value of mega sporting events.

London’s Olympic Park, the former heart of the Games, is being transformed into a model for urban living as part of a far-sighted redevelopment project. The result will include acres of verdant parkland, about 11,000 new homes, a new school and medical clinic, 75 kilometers (46 miles) of hiking and cycling trails, nearly 2 million square feet of retail and entertainment areas, and several world-class sporting venues - all on what had been an industrial wasteland.

The revamped Olympic Park is already proving its value as a sustainable driver of economic growth. Planners expect the park to draw more than 9 billion visitors by 2016. Crowds have flocked to recent concerts by Timberlake and other well-known performers. Sports fans turned out in droves last weekend when sprinter Bolt, champion long-distance runner Mo Farah and other medalists from the 2012 Games returned to the site of their previous victories for three days of high-level competition during the London 2012 Anniversary Games. Indeed, all eight Olympic venues from London 2012 have legacy tenants.

But the Games legacy extends far beyond the former Olympic Park. The Games inspired or accelerated a host of transport investments that will benefit residents and visitors for years to come. A total of ￡6.5 billion (11.1 trillion won) was invested in new and improved transport infrastructure, including new rail lines, line extensions, station/platform improvements, increased capacity, improved cycling and pedestrian routes.

After generating tens of thousands of jobs during the construction phase in the midst of the global recession, the Games continue to foster economic growth. The Games have already resulted in an increase of ￡9.9 billion in trade and investment in the UK, further strengthening its international business legacy.

Local organizers of future Olympic host cities have heeded the lessons of London 2012’s vision. Citizens of Rio, for example, are already benefitting from a new rapid transport line, with three more to come, in addition to a new metro line. Many other legacy initiatives are also under way in Sochi, Russia, and in Pyeongchang.

These positive outcomes do not happen spontaneously. The IOC places a strong emphasis on legacy planning in its work with host cities. The organizers of the London Games proved that visionary leadership and close cooperation with government officials ensure that investments in the Olympic Games will deliver returns long after the closing ceremony. We are confident that by remaining focused on its long-term legacy vision, Pyeongchang 2018 can expect similar successes on its horizon as well.

* The author is the IOC president.