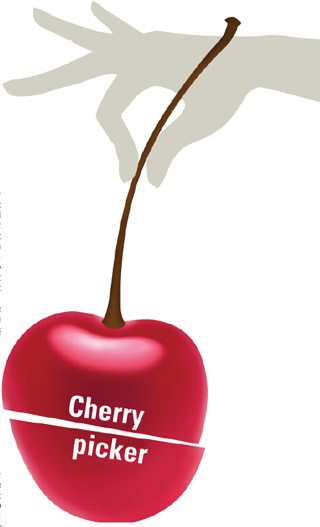 Kim Ji-yeon, a 34-year-old office worker, has recently been spending a considerable amount of time on the Internet searching for information on credit cards. Six months ago, Kim had switched from using the Hyundai Purple Card - which she has been holding onto for two years while paying a 600,000 won ($540) annual fee - to the Korea Exchange Bank Crossmile SE Card. Now she feels the need to try another card product.

“The credit card I have been using [for two years] offered a 200,000 won duty free voucher and a free airline ticket for a friend of mine, but the annual fee is too high,” said Kim. “The new card that I switched to [six months ago] offers more benefits like mileage accumulation compared with the annual fee I pay. But I decided to use another card after hearing that from September many of the benefits will shrink, like the number of times I’m able to use the airport lounge.”

While local credit card companies are under mounting pressure from declining profits, so-called cherry pickers like Kim, who go after perks offered by card companies, are no longer feeling the pleasure of receiving benefits.

For several years, credit card companies have aggressively offered users additional services and benefits to lure customers, but now things are different. The number of cherries, or services offered by credit card companies, has dropped because of falling net profit while card rates have been lowered over time.

According to the Financial Supervisory Service, in the first quarter of this year, the net profit of seven credit card companies was 462.2 billion won, which is 45.2 percent lower than the same period last year. And the outlook for net profit in the second quarter, which will be announced soon, also looks gloomy. 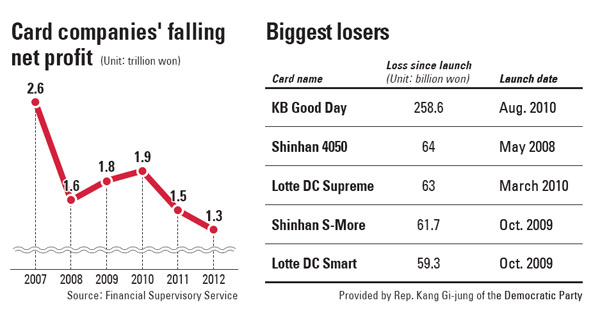 Data released by the Credit Finance Association last week showed credit card spending in the second quarter grew at the lowest rate since 2005. Figures showed that in the second quarter of this year, the amount of card spending was 135.9 trillion won, up 4.1 percent compared with the same period last year. The growth rate is the lowest in eight years.

“At the present state we’re in, even if we want to offer more services to our customers, we can’t,” said an official from the card industry.

There is a reason why credit card companies have decided to reduce customer services to cut costs. It is difficult for them to significantly improve their bottom lines by undergoing restructuring because of strong opposition from their labor union and the policy direction pushed by the Park Geun-hye government focusing on supporting ordinary people. Officials also note that there is a limit to reducing operational expenses at a time when credit card companies already have been tightening their belts.

“Card companies over recent years have competitively expanded additional services to customers to attract more users amid the growing market,” said another official from a major credit card company. “At present, however, the market has reached a saturation point and it is inevitable for us to reorganize our products to focus more on profits than sales.”

Earlier this month, Hana SK Card informed customers that conditions had changed for its Club SK Card. Previously, users received a 10,000 won discount on their telecommunication fee if their card spending exceeded 300,000 won a month.

“We wouldn’t have changed the terms of our services if we had been able to adequately reduce internal costs,” said Kim Young-seon, an official from Hana SK Card. “The reason we were forced to cut down services despite customer complaints is because we have tried everything, like cost-cutting in marketing fees and office supplies.”

Starting in November, services that have been offered to Citibank’s Rewards Card users will also be reduced. Card users will have to spend more with their cards to receive the same card points they do now. For example, those who spend less than 700,000 won per month, 0.75 percent of spending is accumulated as points; in November the rate is expected to fall to 0.5 percent.

“It was inevitable for us to make service adjustments following a cost increase due to the changing financial environment,” said an official from Citibank. “And it’s not only us. Other card companies that have products similar to our rewards cards are also reducing additional services.”

Korea Exchange Bank’s Crossmile Card, which has been known for its unprecedented services, also will reduce benefits from September. Currently, users pay a 100,000 won annual fee and in return receive various services such as airline mileage accumulation depending on the amount they spend, unlimited airport lounge use and a Starbucks brunch once a month. However, from September card customers will be allowed to use free airport lounge services only 12 times a year.

With card companies reducing services to find their own way of survival, customers are feeling perplexed.

“The reason I switched credit cards in the past was because every time card companies unilaterally abolished services,” said Kang Sung-koo, a 29-year-old office worker. “Consumers usually believe that the services they’re informed of at the time of subscription will last until the card expires, but that’s not the case.”