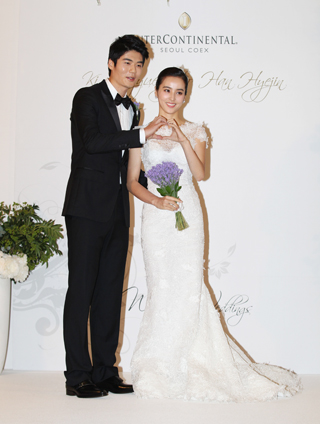 Actress Han Hye-jin of the film “26 Years” left Korea to reunite with her new husband in England on Monday.
Due to scheduling conflicts of football player Ki Sung-yueng, the newlywed couple has been apart since their wedding on July 1 at the Intercontinental Hotel in southern Seoul.
An official at Han’s agency was quoted as saying that Han avoided getting attention upon her departure, according to local media reports.
The official added that the actress won’t come back until the press conference for her movie “When A Man Loves.” The movie is tentatively scheduled to be released in November.
She finished filming the movie last week and also completed recording the last episode for the SBS talk show “Healing Camp,” which she has hosted alongside comedian Lee Kyung-kyu and Kim Je-dong.
It is said that she can come back anytime when she receives a call from some work because of her passion for acting, although it has not been decided when she is going to come back.