New exchange for start-ups off to a slow start

New exchange for start-ups off to a slow start 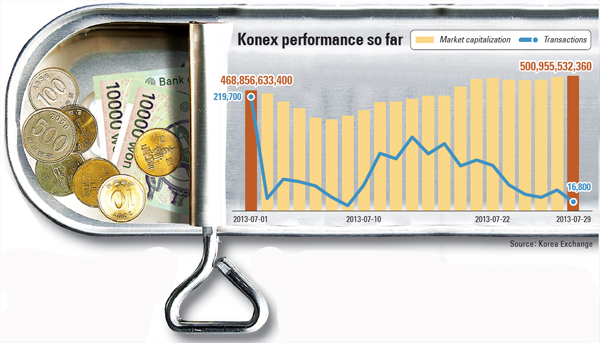 It has been a month since the opening of Konex, the stock market intended to bolster tech-focused start-ups as part of the Park Geun-hye administration’s “creative economy” initiative. Although it is too early to judge the success of Konex, it has struggled to attract investors after attracting much attention when the idea of such a market was first made known.

His visit came after several comments from market participants that Konex had been having trouble drawing investors.

The main purpose of the new market is to help start-ups raise capital, a role Kosdaq failed to fill.

The day after the prime minister’s visit, 21 companies on Konex joined together to hold an investor-relations presentation to promote their businesses.

However, the situation hasn’t improved much, with transactions falling since the second week. The number of shares traded on the Konex on July 18 fell below 100,000, and by Monday it was below 16,800.

The situation has gotten so bad that the majority stakeholder of ITCEN System sold some of his shares of the company for 5,000 won ($4.45) each, 61 percent less than the over-the-counter price.

The brokerage industry said the failure to attract investors was the result of a Konex structural problem: the requirement that stock buyers make a deposit of 300 million won.

“Our employees could sell the company’s treasury stocks on the Konex, but they can’t buy back without the 300 million won deposit,” said Kim Goon-ho, FnGuide president.

Retail investors are not the only ones finding it hard to participate in the new stock market.

For institutional investors, the problem is the eased requirements the government pushed to encourage transactions.

Currently, companies listed on the tech-heavy Kosdaq have 64 categories of regulatory filings with which they must comply. Konex has 29.

Institutional investors are hesitant to invest in companies listed on the Konex that are exempted from various mandatory filings because they have credibility concerns, said Hwang Se-yoon at Korea Capital Market Institute.

“It seems as though the government is trying to show quick results on its creative economy drive considering how Konex was pushed ahead without much preparation,” said an industry insider who asked not to be named.

The government argued that the success of Konex shouldn’t be judged simply by the number of transactions since the beginning of last month.

“Konex is a market for venture capitalist and institutional investors and not retail investors,” said Seo Tae-jeong, head of the capital market department at the Financial Services Commission.