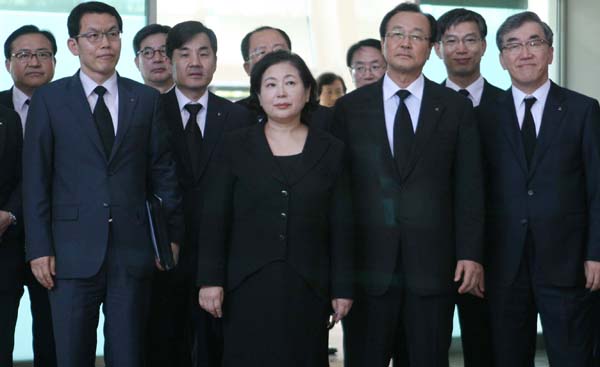 Hyundai Group Chairwoman Hyun Jeong-eun returns to the South on Saturday after visiting her late husband’s grave in the Mount Kumgang resort area in North Korea for a memorial service. [NEWSIS]

Hyun told reporters upon returning to South Korea on Saturday that Hyundai has not given up on the suspended Mount Kumgang tourism project. Her late husband spearheaded the cross-border Mount Kumgang resort and Kaesong Industrial Park, which are both currently at a standstill.

She also said the North Korean leader sent a prayer in his letter to Chung (1948-2003) and his best wishes to Hyundai and all of Chung’s family members.

It is the first time Kim has sent a personal letter to a South Korean and comes as negotiations between the two sides are at a deadlock over the idle Kaesong Industrial Complex, a remnant of former President Kim Dae-jung’s Sunshine Policy.

Hyun led a delegation of 38 officials from Hyundai Asan, the affiliate of Hyundai Group that conducted Mount Kumgang tours in North Korea, on the six-hour visit to Mount Kumgang at the invitation of Pyongyang, as is customary.

Won and a North Korean delegation of 20 officials greeted the Hyundai delegation and attended the memorial service. Afterward, the group toured the resort facilities.

“After inspecting the hotel and tourism facilities, there seem to be no problems, but for tourism in the future, there will need to be closer safety inspection and renovation,” said Hyun. “Though there has been no tourism in more than five years, Hyundai will not give up on tourism in Mount Kumgang. We will work hard so that tourism can resume.”

It was Hyun’s first visit in four years to Mount Kumgang, which was shut down in 2008 after a South Korean tourist was shot and killed by a North Korean guard.

She attended Kim Jong-il’s funeral in December 2011 to reciprocate for a North delegation attending the funeral of her husband.

Chung committed suicide in August 2003 during an investigation into his role in funneling money to the North ahead of the monumental 2000 summit in North Korea under the Kim Dae-jung administration.

The North’s Korean Central News Agency reported yesterday that Kim, in his letter to Hyun, praised her late husband’s work in “developing inter-Korean relations and achieving the country’s reunification.”

But no political message was conveyed between the two delegations regarding reopening Kaesong Industrial Complex or the resumption of tourism at Mount Kumgang.

At low-level talks on reopening Kaesong, North Korea proposed that the South restart tours to the resort as well as family reunions, but backed down after the negotiations stalled.

Despite a proposal by Seoul a week ago urging North Korea to accept final-round working-level talks to establish safeguards to prevent a recurrence of a shutdown of the Kaesong complex, closed since April, Pyongyang has not responded.