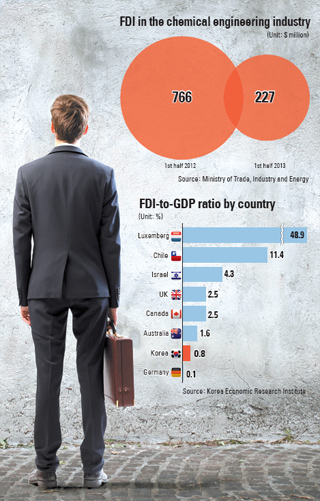 An estimated 2.3 trillion won ($2 billion) investment is pending at the National Assembly as lawmakers oppose the government’s move to ease regulations on foreign businesses.

Finance Minister Hyun Oh-seok promised during his field trip last week that his ministry will push for revising the nation’s law on foreign investment in September after it failed to do so in June.

Under the current law on fair trade, a joint venture by Korean and foreign companies must be owned 100 percent by the Korean company. The Finance Ministry announced a measure to halve the percentage as part of the Park Geun-hye government’s first investment promotion plan in May.

“It is difficult to attract foreign investment because of the 100 percent rule,” Yoon Jang-hyo, a manager at SK Global Chemical told the finance minister when he visited the Onsan Industrial Complex in Ulsan last Thursday.

If the minister doesn’t keep his word, SK is at risk of losing a 1.3 trillion won investment by Japan’s JX Energy.

GS would lose a 1 trillion won investment under a contract with Japan’s Showa-Shell and Taiyo Oil.

On the other hand, if the two contracts are successfully sealed, the country’s petrochemical exports are forecast to grow by 4 trillion won a year.

Conglomerates grumble that the regulation on their affiliates hinders their ability to attract foreign investment. GS Caltex, SK Global Chemical, LG Display and Doosan Infracore are the affiliates banned from setting up joint ventures with foreign businesses.

SK Global Chemical, for example, is currently unable to execute a total investment of 960 billion won, including 480 billion won by its foreign partners. The company was going to operate a 1 million-ton paraxylene plant in Ulsan in cooperation with JX Nippon Oil & Energy early this year.

“If the regulation is not going to be eased this year, we might have to give up the plant,” said a company insider.

SK Lubricants has the same problem with a 350 billion won plant.

GS Caltex has a plan to build a 1 trillion won chemical plant with an annual capacity of 1 million tons in Yeosu, South Jeolla, with 500 billion won in investments from Showa-Shell and Taiyo Oil.

“Since demand for paraxylene is forecast to rise by 6 to 7 percent each year, it is important not to miss the chance to invest now,” said a company employee. “If we are late, foreign investors would turn their eyes to China or other countries.”

Paraxylene is used in the production of textiles and plastic bottles. Since Japanese companies are major suppliers of raw materials for paraxylene, collaboration with them is essential for Korean companies that have the production technology.

The chemical engineering industry is experiencing declines in foreign investment due to such delays.

According to the Ministry of Trade, Industry and Energy, foreign direct investment made in the industry reached $227 million in the first half of the year, down 70 percent from the same period last year.

The government seems to be rushing to address the problem, but that is only making businesses much more uneasy.

Industry Minister Yoon Sang-jick had promised to solve the issue in April, but progress has been slow.

Since the controversial regulation is part of the fair trade law, the government intends to retain the law but revise the foreign investment law.

But the special revision bill couldn’t even reach the main floor of the National Assembly in June due to opposition from lawmakers who argued it would support conglomerates.

“It is urgent to pass the bill if the government can’t overhaul the fair trade law at the moment,” said Lee Byeong-ki, a research fellow at Korea Economic Research Institute. “The passage of the bill would be a milestone for the government to prove its determination to boost investment.”