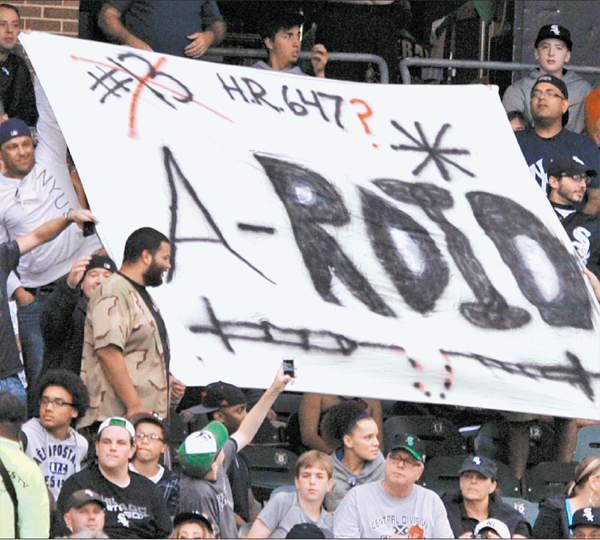 Fans holds a sign made for New York Yankees’ third baseman Alex Rodriguez during the first inning against the Chicago White Sox in Chicago, Monday. Rodriguez was suspended through 2014. [AP/NEWSIS]

NEW YORK - Alex Rodriguez was suspended until the end of the 2014 season and three other All-Stars were handed bans as 13 players were punished by Major League Baseball on Monday for their role in a doping scandal which has rocked the sport.

Rodriguez, the game’s highest-paid player and a three-time league MVP, remained defiant and appealed the decision, allowing him to play for the New York Yankees for the first time this season on Monday as he makes his comeback from a long-term hip injury.

Nelson Cruz, Jhonny Peralta and Everth Cabrera were the All-Stars given 50-game bans for their relationship to Biogenesis of America, a Florida anti-aging clinic accused of distributing banned performance-enhancing drugs.

Rodriguez confirmed he will appeal his suspension, which covers 211 games, by Thursday’s deadline. And since the arbitrator isn’t expected to rule until November or December at the earliest, Rodriguez will likely be able to play the rest of this year.

He received a hostile reception from Chicago fans in Monday’s game against the White Sox, being relentlessly booed and jeered, while being subject to chants of “Steroids! Steroids!”

He had one hit in four at-bats as the struggling Yankees lost, 8-1.

“The last seven months has been a nightmare - has been probably the worst time of my life for sure,” Rodriguez said.

The other 12 players agreed to their 50-game penalties before the punishments were announced, giving them a chance to return in time for the playoffs.

Ryan Braun’s 65-game suspension last month and previous penalties bring to 18 the number of players sanctioned for their connection with Biogenesis.

MLB said Rodriguez’s drug penalty was for “his use and possession of numerous forms of prohibited performance-enhancing substances, including testosterone and human growth hormone over the course of multiple years.”

His punishment under the labor contract was “for attempting to cover up his violations of the program by engaging in a course of conduct intended to obstruct and frustrate the office of the commissioner’s investigation.”

Asked Monday, Rodriguez did not seek to deny using PEDs, saying “when the time is right, there will be an opportunity to do all of that. I don’t think that time is right now.”

“It’s been the toughest fight of my life. By any means, am I out of the woods? This is probably just phase two just starting. It’s not going to get easier. It’s probably going to get harder.”

Rodriguez admitted four years ago that he used PEDs while with Texas from 2001-3 but has repeatedly denied using them since.

“I’m not here to judge people. It’s not my job,” Girardi said. “He’s a player as long as he’s in our clubhouse.”

Girardi called the suspensions “another black eye for us, but we’re trying to clean this game up.”

Cruz, an outfielder, leads Texas in RBIs and Peralta has been a top hitter and shortstop for Detroit, a pair of teams in the midst of pennant races. They will be eligible to return for the postseason.