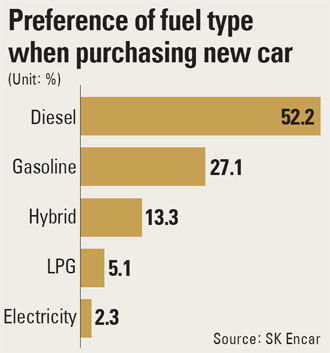 The popularity of diesel cars is increasing as Korean drivers look for better fuel economy, according to a survey from SK Encar.

The nation’s largest used car dealer said yesterday that its survey of 527 people who plan to buy a car in the near future showed that diesel was the preferred fuel of 52.2 percent of respondents, followed by gasoline (27.1 percent) and hybrid (13.3 percent), liquefied petroleum gas (5.1 percent) and electricity (2.3 percent).

“Diesel is getting popular because consumers want to spend less on fuel,” said an official from SK Encar.

SK Encar said the popularity of diesel cars is also reflected in rising sales of imports. According to data from the Korea Automobile Importers and Distributors Association (Kaida), 60.8 percent of foreign-made vehicles sold in the first seven months of this year were diesels, up 11.5 percentage points from a year ago.

Following the rise of diesels, Hyundai Motor said last week that it would introduce a diesel version of its compact Avante this month, reviving the model for the first time in four years. The company is also considering a diesel Grandeur.

Meanwhile, in SK Encar’s survey, 36.4 percent said they will go for a midsize sedan when purchasing a new car, followed by sport utility vehicles (31.1 percent) and compact cars (13.7 percent).

The company said the popularity of midsize sedans seemed to have eroded recently with the rise of SUVs following the vacation season. But interest has been revived by the release of upgraded versions of midsize sedans, such as Renault Samsung Motors’ SM5 TCE and Kia Motors’ new K5.

The combined share of preference for foreign cars was 40 percent compared to the foreign market share of 12.3 percent at the end of July. SK Encar said the result indicates more consumers will want to purchase imports in the future.

By price range, nearly 35 percent answered that they are willing to spend about 30 million won ($28,868), but less than 40 million won. Cars that are priced in the 20 million won range earned second most vote, followed by the 10 million won range, which is general price for local city cars and subcompacts.