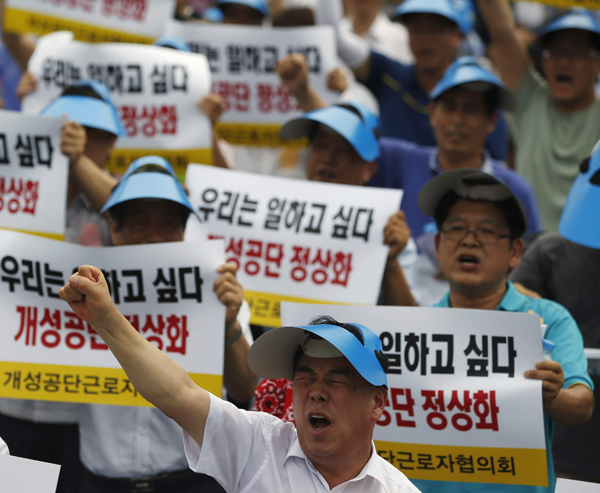 South Korean employers and employees from factories in the Kaesong Industrial Complex in North Korea protest the closure of the business park at the Imjingak pavilion near the Demilitarized Zone in Paju, north of Seoul, yesterday.[REUTERS/NEWS1]

South and North Korea agreed to hold a seventh round of low-level talks about reopening the jointly-run Kaesong Industrial Complex a few hours after the South took preliminary steps to permanently withdraw its businesses.

North Korea yesterday accepted the South’s proposal for the talks nine days after they were proposed by Seoul’s Unification Minister Ryoo Kihl-jae.

The Committee for the Peaceful Reunification of Korea, the North Korean organization in charge of inter-Korean affairs, released a statement through state media yesterday and proposed the talks be held on Aug. 14 inside the complex, in the city of Kaesong, in North Korean territory.

South Korea accepted the venue and the date hours after the statement was released.

“We judge that North Korea showed a positive response to our proposal for government-level talks to resolve the matter of the Kaesong complex,” said Kim Hyung-suk, spokesman of the Ministry of Unification, said. “We expect the upcoming talks to come up with a rational solution to problems of the Kaesong Industrial Complex and its ‘constructive normalization.’?”

In the statement, North Korea reiterated earlier demands such as lifting the entry ban on South Korean workers and cargo into the complex.

However, North Korea removed a controversial demand from previous rounds, which read, “South Korea should pledge not to commit political misbehavior and insults and not to carry out military threats.”

“North Korea showed a changed attitude to prevent further disruptions by taking out the clause in regard to ‘political misbehavior’ and ‘military threats,’?” a Unification Ministry official told reporters at a meeting yesterday.

The “political misbehavior and insults” apparently referred to South Korean media reports in March that said the North would never be able to shut down the complex because it needed the hard currency it spun off.

However, one demand remains a source of conflict. It reads, “Both the North and the South will prevent further disruption and guarantee the normal operation of the complex without being affected by any political circumstances.”

Southern negotiators said it was North Korea who should promise stable operations regardless of political tensions, not the South.

At the six previous rounds of talks, the Koreas have sparred over which side should take responsibility for the four-month suspension of business at the complex. Seoul insists the North is solely responsible, while the North says both sides are.

“If [the South] accepts all of these generous proposals of ours, we will agree on holding the seventh low-level talks for the Kaesong Industrial Complex in the complex on Aug. 14 without any preconditions,” a spokesman of the committee said in the statement. “And we propose to make good accomplishments there and deliver good news to all of our people taking the opportunity of the commemoration of Aug. 15,” which is the anniversary of liberation from Japanese rule in 1945.

On July 28, Unification Minister Ryoo proposed a seventh round of low-level talks, which he said would be “final talks” for the Kaesong park.

Ryoo threatened to “take a grave decision” if the North refused the proposal, although he didn’t say what it would be. Analysts speculated it was a threat by South Korea to permanently shut down the eight-year-old complex.

The North Korean proposal for talks came about an hour after the Southern government announced a decision to pay compensation to the business owners in Kaesong for their losses, which raised speculation that Seoul would walk away from the industrial park for good.

If the business owners receive compensation, they should surrender ownership of their assets in the complex to the government. Technically, the government would be able to sell off those assets and permanently shutdown the complex.

According to the Unification Ministry, the government would provide a total of 280.9 billion won ($251 million) of state money to the 109 South Korean companies under Inter-Korean Business and Cooperation Insurance, which the owners have paid to the government since they started their business in the complex in case of any unexpected disruptions.

The owners can request up to 90 percent of their investments with a 7 billion won maximum reimbursement per company.

“Due to North Korea’s unilateral violation of the inter-Korean agreement, such as the announcement of a temporary suspension of operations on April 8, there has been a reason for the government to provide the insurance [to the companies] starting May 8,” Unification Ministry Spokesperson Kim said at a briefing yesterday. “Under current law, if an inter-Korean business is suspended for more than one month by a unilateral violation of the inter-Korean agreement by the North Korean regime, the government should pay back the Inter-Korean Business and Cooperation Insurance.

“Starting tomorrow, the Export-Import Bank of Korea will offer the insurance to the firms that requested it,” Kim said yesterday.

But if operations at the Kaesong park were normalized, the owners could request their assets back if they return the insurance money to the government.

“Based on the amount of their investments, the owners have paid different amounts of insurance so far, with annual interest from 0.375 percent to 0.75 percent of the investment,” an official at the Inter-Korean Business Department at the Export-Import Bank of Korea told the Korea JoongAng Daily by phone.

“It’s compensation for the losses of investments, not losses of sales [due to the suspension],” spokesman Kim said at the briefing. “When it comes to losses of revenues, we have already offered a special loan program.”

In May, the government announced 80 billion won in low-interest loans for the Kaesong business owners with 2 percent of annual interest.

The insurance will be paid by the Inter-Korean Cooperation Fund and the state-run Small and Medium Business Administration, according to the ministry.

Spokesman Kim said the payment of the insurance was not part of the threatened “grave decision.”

Unification Minister Ryoo Kihl-jae was criticized for taking summer vacation starting Monday but spokesman Kim said, “Ryoo has fully communicated with officials and is in the country. He is coming to Seoul now.”