Teaching kids how to dream

Teaching kids how to dream 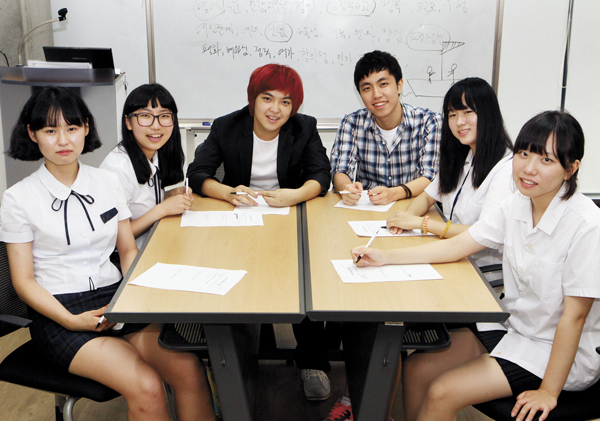 Members of Dream Consultant, a mentoring group at Seoul National University, discuss life and aspirations with sophomores from Jinbu High School. (From left) Jeon Ha-na and Park Chae-ryeong from Jinbu, Kwon Yeong-jun and Jo Dong-wu from SNU, and An Ji-wan and Lee Ju-yeong from Jinbu. By Gu Yoon-Seong

Kwon Yeong-jun, a third-year Industrial Engineering student, heads the student-run group. Its name is deliberate: The group deals in dreams.

“Dreams aren’t about specific jobs like being a doctor, judge or a CEO,” said the 20-year-old during the concluding ceremony of the program on Aug. 3. “They are about what you value, what you really want to do.”

During the 12-week term, mentoring was done online and on a two-day “dream camp” held this month. Twenty students from Yangpyeong High School in Gyeonggi, and another 20 from Jinbu High School in Gangwon were mentored by 20 undergraduates at SNU. Each mentor handled two students for one to two hours once a week.

“I’ve become much more certain about my aspiration to become a teacher,” said Lee Ju-yeong, an 17-year-old 11th grader from Jinbu High School.

“I had vague plans about being a scientist, but I’ve learned that there are many different fields in science,” said Choi Won-jeong, a 16-year-old tenth grader. “And now, I know just exactly what I should do to pursue that dream.”

For Yu Yeong-hyun, a 17-year-old 11th grader from Yangpyeong, Gyeonggi discussing the pursuit of happiness with her mentor was the most memorable part of the program. “It was inspiring to hear that one must go through pain to attain happiness,” Yu said.

Some of the advice was of immediate use to the students.

“I used to suffer from addiction to smartphones,” said Lee Su-min, an 17-year-old 11th grader from Yangpyeong. “But my mentor helped me get over that.”

Jo Man-gi, a 42-year-old teacher at Yangpyeong High School, said the students don’t have access to counselors or opportunities to meet people like the SNU students in the countryside, which is why they were interested in the program. “It’s good to be shown a diverse set of paths,” he said. “A program that runs for twelve consecutive weeks is more effective than a one-time event.”

An Guk-jin, a 52-year-old teacher at Jinbu High School said, “Schools in the countryside lack such advising. The program has definitely given the students more passion about the importance of studying.”

And the mentoring wasn’t as one-way as you might expect. Huh Min-heung, an SNU senior, said the program offered an opportunity to reflect on his own aspirations.

“It helped to actually express to someone younger things I’ve learned through trial and error during my time as an undergraduate,” Huh said. The mentoring program systematically explored aspects of life such as aspirations, love, honesty and work ethics.

The group leader, Kwon Yeong-jun, said many of the SNU students were initially unsure of their ability to advise younger people about realizing their dreams “when we haven’t found one yet for ourselves.”

He added, “But soon we realized that mentoring isn’t necessarily a one-way process. The mentor and mentee in fact help each other explore their dreams.”