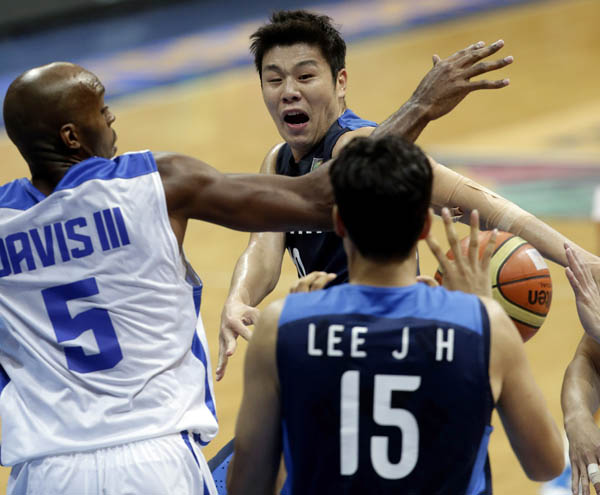 Korea's Cho Sung-min, center, passes the ball to teammate Lee Jung-hyun (15) as Taiwan's Quincy Davis III, defends during the bronze match of the FIBA Asia Basketball Championship at the Mall of Asia Arena at suburban Pasay city, south of Manila, Philippines Sunday. Korea won 75-57 to win a berth to the World Cup to be held in Spain next year. [AP/NEWSIS]

Korea’s men’s basketball team beat Taiwan, 75-57, at the third-place decider of the FIBA Asia Championship in the Philippines yesterday, earning Korea its first berth to the world championships in 16 years.

Kim Min-goo scored a game-high 21 points as Yoo Jae-hak’s squad dominated the game early on at the Mall of Asia Arena, south of Manila. Kim Joo-sung pitched in with 12 points and eight rebounds while Cho Sung-min added 11 points.

The top three teams at the Asia Championship earn a berth to the FIBA World Cup. The other two berths went to Iran and the Philippines, who entered the finals late last night.

It is the first time that Korea has landed a slot in the World Cup, previously known as the World Championship, since it competed in the Greece event in 1998. The 2014 World Cup, to be held in Spain beginning Aug. 30, 2014, will be Korea’s seventh appearance at the worlds, at which 24 teams will compete.

It was a revenge match for Korea, which lost to Taiwan, 73-60, at the William Jones Cup in Taiwan last month.

Korea, which lost to the host the Philippines, 86-79, at the semifinals a day earlier, collected themselves and concentrated from early on, leading 50-29 at the half.

Taiwan rallied in the third quarter, reducing the deficit by 15 points, but Kim and Yoon Ho-young maintained Korea’s momentum, chipping in 3-pointers.

It is the second consecutive time that Korea finished third at the Asia Championship after the China event in 2011.