DP seizes on taxes to protest

DP seizes on taxes to protest 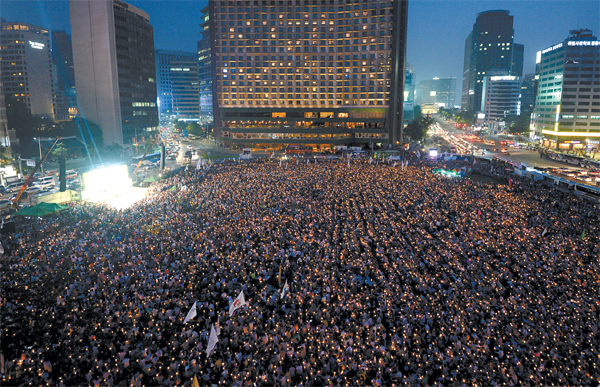 A candle-light demonstration to protest the National Intelligence Service’s alleged interference in last year’s December presidential election in central Seoul Saturday was attend by 16,000 people, according to the police, while organizers reported attendance at 50,000 people. [NEWS1]

To add momentum to its ongoing campaign of anti-administration street protests, the largest opposition Democratic Party said yesterday it will focus the protests against the government’s tax reform plan.

The rallies were originally called to protest the ruling party’s lack of cooperation in a probe of alleged political interference by the main intelligence agency in last year’s presidential election.

Kim Han-gill, chairman of the Democratic Party, said the campaign against a new tax reform plan, unveiled Thursday by the Park Geun-hye government, will start today.

“We will collect signatures in protest of the ‘tax bombardment’ [of the middle class],” said Kim during a press conference held inside the party’s tent at Seoul Plaza in central Seoul yesterday. Yesterday marked the 100th day since Kim was elected DP leader.

The government announced Thursday it would end many tax credits to boost revenues, and that people making more than 34.5 million won a year would see tax bills rise at least 160,000 won ($144). 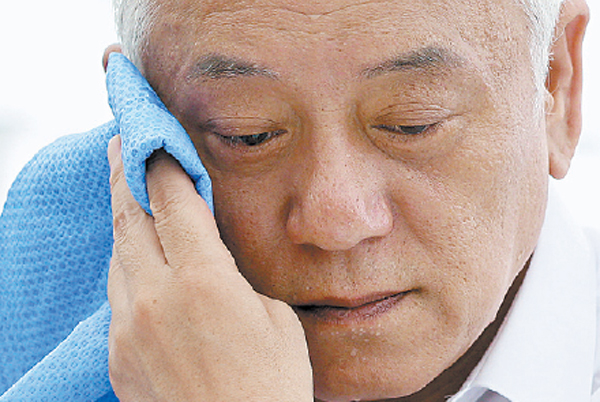 An estimated 4.34 million employees will see their tax bill rise in 2014.

Claiming the tax proposal will bring the middle class to the edge of a precipice, Kim vowed to fight it.

“This tax revision focuses on collecting more taxes from the working class, so we can never accept it,” Kim said.

Kim’s remarks, made on the 11th day of the party’s street rallies, were exhortations for more support from the middle-income class, especially breadwinners in their 30s and 40s.

Kim’s aides told the JoongAng Ilbo that the tax issue can be “much more explosive” than the National Intelligence Service’s alleged meddling in the last presidential election. They said for salaried workers, the tax change could be as powerful an issue as U.S. beef imports in 2008, which eventually led to massive demonstrations against the Lee Myung-bak administration.

Starting today, the opposition party will wage a signature campaign against the tax plan at sites with the largest transient populations, such as Myeongdong in central Seoul.

Public criticism has been growing against the new tax plan as many think it unfairly increases the tax burden on average salaried people.

In response to negative public reaction, the ruling party promised Friday and Saturday the tax reform could be revised in a way to lessen the burden on the working class taxpayers.

“The Democrats are irresponsible for taking the tax issue to the street,” said Representative Kim Tae-heum, a Saenuri spokesman. “If they have an issue with the government proposal, they should take it to the National Assembly and discuss it with the ruling party.”

In addition to their daily meetings at the Seoul Plaza, the Democrats took part in a massive vigil protest Saturday organized by civic groups to condemn the spy agency’s alleged interference in the presidential election and to demand President Park’s apology.

A majority of DP lawmakers, 115 of the 127 in total, participated in the Saturday protest at Seoul Plaza.

Representative Moon Jae-in, the defeated presidential candidate of the DP, however, did not join.

The police estimated about 16,000 people joined the protest Saturday, a figure much lower than the 50,000 claimed by the organizer.

Lee Jung-hee, chairwoman of the minority opposition Unified Progressive Party, was among the participants.