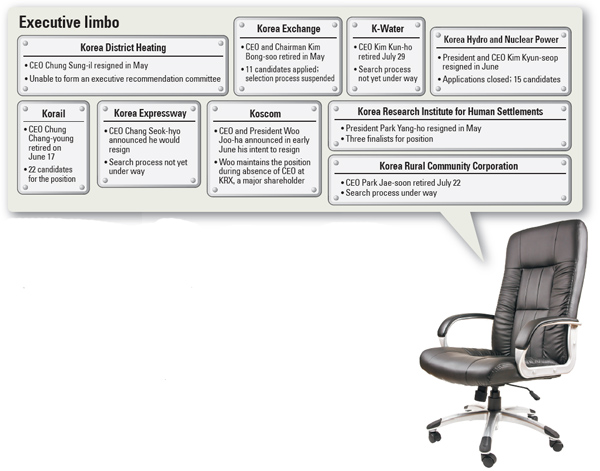 Prolonged vacancies at the top have left many public companies and state-run institutions in a leadership limbo.

All this has been happening since CEO Kim Bong-soo stepped down May 26. Kim’s position has been left empty for three months.

At least 10 energy-related public companies - most notably Korea Hydro and Nuclear Power (KHNP) ­- are on particularly high alert as many CEO offices remain vacant during the extended heat wave and threats of blackouts.

KHNP CEO Kim Kyun-seop stepped down after taking full responsibility for the scandal involving counterfeit nuclear power plant parts. There are 15 candidates to replace him, but the selection process has been suspended with no timetable for its resumption.

That means personnel appointments and decisions will be delayed, leaving a management vacuum.

There has been no progress on reopening three nuclear power plants shut down for using the counterfeit parts. Replacing the parts would require 10 billion won ($8.9 million) and approval from the corporation’s chief executive.

Also, this summer is the busiest season for Korea Expressway due to heavy rains and jammed highways for vacations and chuseok, the coming Korean traditional Thanksgiving holiday.

But the agency has stalled under lame-duck leadership. The CEO Chang Seok-hyo has announced he will resign, but an executive recommendation committee has made no moves since its first meeting.

The situation is similar at Korea Water Resources Corp., where a caretaker-acting-president system has been in place since its CEO moved out in late July. There is a near consensus within the company to take care of only trivial matters until a new CEO is named.

“The Thailand water management project is almost wrapping up,” said a Korea Water Resources source, “but we are waiting until there is a new CEO.”

At Korail, there are 22 candidates to replace CEO Chung Chang-young, who retired in mid-June. Management authority has been transferred from an acting CEO structure to an emergency management system. However, it is unable to act on such critical issues such as the Yongsan development project lawsuit and allowing business participation in KTX.

“Most decisions, some on indispensable issues, are set to be delayed. Any personnel decisions are also frozen in order to prevent any confusion,” said a Korail official.

The delay also results in more competition for the CEO opening, bringing in more outsiders.

“As the Park Geun-hye government emphasizes enforcement of law, any interruptions from the political sphere that may blur the principle of public institution management law should be restricted,” said Lee Chang-won, a public administration professor at Hansung University. “Once politics seep into personnel appointments at public organizations, the basic purpose of autonomous management starts fading.”

Such worries arose at the Korea Exchange due to rumors that President Park Geun-hye wanted one of her supporters in the job. That led many former public officials to apply and there currently are 11 candidates.

“We are frustrated because neither the Blue House nor Financial Services Commission is giving us an answer, whether to stick with the resumed race or start a new one,” a source said.

The Korea Rural Community Corporation last Wednesday resumed its hiring process, with three or four ex-lawmakers applying on their own or by recommendations.