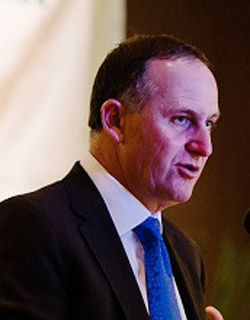 New Zealand Prime Minister John Key said that he and President Park Geun-hye reaffirmed their commitment to engage North Korea and boost opportunities for small- and medium-sized enterprises as he concluded his five-day Seoul visit to commemorate the 60th anniversary of the armistice agreement that ended the Korean War on July 27, 1953.

“The veterans were quite literally the pioneers of our relationship with Korea. They were here long before the first diplomats, businesspeople or teachers,” said Key to 100 government and business leaders at a forum hosted by the Kiwi Chamber at the Hyatt Hotel in central Seoul last month.

Calling North Korea “an uncertain neighbor,” he added that New Zealand calls on them “to commit firmly to abandon nuclear weapons and to engage constructively with the international community.”

Key spoke on behalf of the United Nations Command at the Korean government’s official Armistice Day ceremony at the Korean War Museum last month, attended by delegations from 27 countries involved in the war, stating he hoped a peace treaty is eventually signed to officially end the war.

“Personally it was a moving time for me to be here because we had a large contingent of New Zealand vets traveling with us in their 80s, so for them, being able to retrace their steps from 60 years ago was very moving,” Key said.

Key led a delegation of about 100 people, including 34 New Zealand Korean War veterans and the Minister of Veterans’ Affairs. He held a summit with Park and met with Prime Minister Chung Hong-won and business leaders, and took part in the Armistice Day events hosted over the weekend.

New Zealand, one of the 16 countries under the UN Command, sent 6,000 troops, over 60 percent of the country’s military force then, of which 45 were killed in action.

Regarding the much-stalled Korea-New Zealand free trade agreement, Key said based on his summit with Park that, “My sense is that she has decided that now is the right time and we should get a deal done.”

Key has visited Korea three times since he became prime minister in 2008. He highlighted his relationship with Park, stating that she visited New Zealand in 2008 as a government guest and in 2012, when she was a presidential candidate. Park’s affinity for New Zealand dates to 1968, when she was part of a delegation which her father, former President Park Chung Hee, led to New Zealand, the first by a Korean leader.