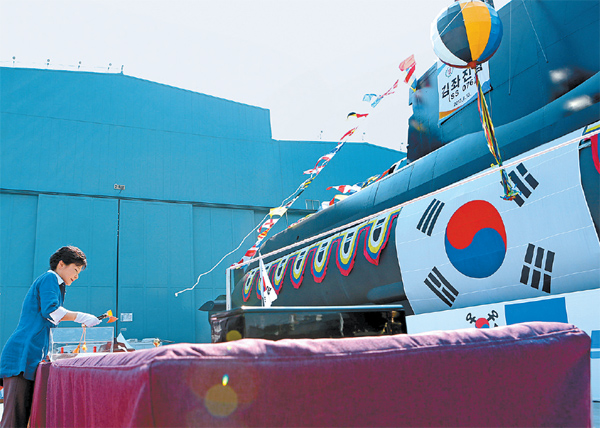 President Park Geun-hye cuts a ribbon with a ceremonial ax to launch a newly-built submarine in the shipyard of Daewoo Shipbuilding and Marine Engineering in Okpo Bay, Geoje Island, South Gyeongsang, yesterday. [NEWS1]

At the launch of a newly-built submarine named after an independence fighter against imperial Japan, President Park Geun-hye said she would safeguard national interests in maritime disputes.

“In an effort to stabilize peace in the Northeast Asian region, the sea is a very important stage,” Park said in a speech at the launch ceremony held in the shipyard of Daewoo Shipbuilding and Marine Engineering in Okpo Bay, Geoje Island, South Gyeongsang, yesterday.

“We should safeguard our seas and national interests in the oceans amid the tough reality of conflicts among nations.”

The 1,800-ton SS-II submarine was named after Korean General Kim Jwa-jin, who won the 1920 Cheongsan-ri (Qingshan-li) Battle against Japanese soldiers in China.

“The Kim Jwa-jin warship represents the spirit of victory and patriotism of General Kim Jwa-jin, who led the Cheongsan-ri Battle to [Korea’s] victory,” Park said. “I ask our Navy to inherit his kind of patriotism to protect our seas for the safety of our nation and people.”

It was the first time a president attended a launch for a submarine.

Park’s emphasis on Korea’s maritime sovereignty came ahead of the Liberation Day on Aug. 15 when Korea regained its independence from Japan in 1945.

The two countries have been disputing sovereignty over Dokdo, Korea’s easternmost islands, which Japan calls Takeshima.

Park also stressed the legitimacy of the so-called Northern Limit Line, the de facto maritime border with North Korea in the Yellow Sea, which Pyongyang does not recognize. “As our young soldiers devote their lives to safeguarding the NLL,” she said, “we can maintain peace in the Yellow Sea and preserve the lives of fishermen there.”