Museum is contemporary, but links to past

Museum is contemporary, but links to past 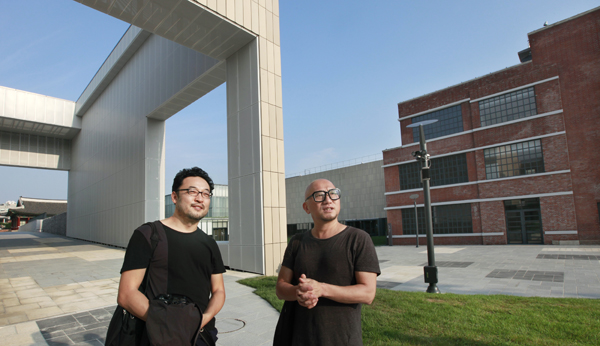 Architect Mihn Hyun-jun, left, and artist Choi Jeong-hwa at the new Seoul branch of the National Museum of Modern and Contemporary Art. The museum, which is scheduled to open in November, includes a combination of new buildings and old. Among the old, there is the former Defense Security Command headquarters (the red building to the right) and the Joseon-period Office of Royal Genealogy (to the left, in back). Mihn designed the museum’s low-rise web of buildings, underground spaces and courtyards to link flexibly with the various galleries and the old neighborhoods of Samcheong-dong and Bukchon that surround the museum. By Park Sang-moon

Seoul’s more recent landmarks, such as the new Seoul City Hall and the Dongdaemun Design Plaza, sparked controversy for their showy designs, which some criticized for neglecting their sites’ histories and clashing with their neighborhoods.

But now the scaffolding has come down from the Seoul branch of the National Museum of Modern and Contemporary Art (Seoul MMCA), a sprawling complex of galleries, courtyards and other facilities set to open in November in the heart of the city. So what is the early judgment on this much-scrutinized, four-year-long, 103.9 billion won ($92.8 million) construction project?

“The numerous restrictions seem to have resulted in rather better results,” said Choi Jeong-hwa, 52, one of Korea’s best-known artists and a resident of the area.

That’s quite an achievement, especially considering that the 6.7 acre facility is in such a historical neighborhood. Gyeongbok Palace lies directly to the west, and the famous neighborhoods of Samcheong-dong and Bukchon border the museum on the north and east.

The museum location, too, is full of history. During the Joseon period (1392-1910), it was the site of the Office of the Royal Genealogy, or Jongchinbu, which housed portraits and other important matters related to former kings and their relatives.

In addition, during the latter part of the 20th century, the location was home to the Defense Security Command (DSC), a major center of secret surveillance activities during the military regime. 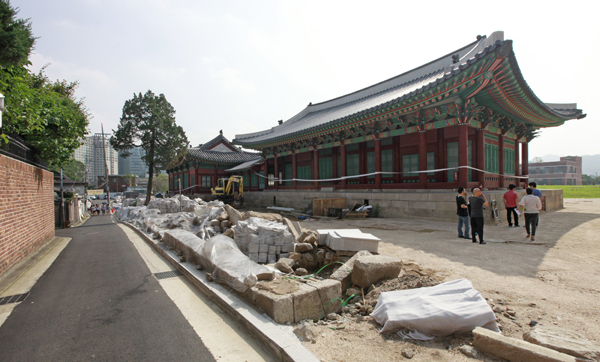 Jongchinbu, the Office of Royal Genealogy, has been returned to its original location as part of the MMCA Seoul.

Accordingly, the construction project came under heavy and constant scrutiny by many loud voices, including cultural heritage groups and neighborhood residents, as well as related government agencies.

The Korea JoongAng Daily was part of a small group invited to tour the museum at the end of July, together with Choi and Mihn Hyun-jun, 45, the architect who designed it.

The new museum combines seven new structures with the Defense Command’s old red-brick building and the traditional, wooden Jongchinbu. The new buildings are all low-rises, covered mainly with pale-brown terracotta tiles, along with some pale-gray granite and glass. The terracotta tiles come in four shades, and, depending on the sunlight, combine to present a deep cream color sometimes, other times a pale gold.

Due to strict building codes, the new buildings are all just three stories high, and descend another three stories below the ground.

The seven new buildings on the museum site are linked through the underground levels, while above ground, they are separated by six courtyards of green grass and white and pale-gray paving tiles. The courtyards smoothly spill out into the space that surround the museum - notably, without fences. It’s an open concept that not only links the museum’s buildings, but also the neighborhood, with its many galleries, restaurants and small, old-fashioned houses.

It’s an unusual concept that Mihn calls “an open museum in the style of an archipelago.”

The complex also looks so different from each side that Mihn describes the design as “a shapeless museum.”

“It’s useless to make a building that tries to say ‘I’m distinguished’ when it’s right beside Gyeongbok Palace,” Mihn said. “So I designed the museum to be modest on the outside, but substantial on the inside.” 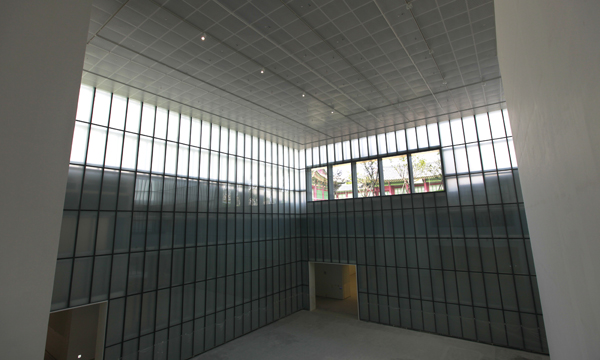 The Seoul Box, the heart of the museum’s exhibition spaces. By Park Sang-moon

Most of the galleries are in central and southern parts of the site. Among them, one of the more notable is the Seoul Box, a 17-meter-high space that is half below-ground and half above, good for accommodating giant installations.

“As an artist, I like the exhibition spaces here, both big and small,” said Choi, referring to the museum’s eight galleries.

Choi is famous for his giant sculptures that project a sublime mood, but are made from cheap, mass-produced objects - for instance, he has built structures in the style of Hindu temples, but made of plastic baskets in gaudy colors, the kind that were popular during Korea’s rapid industrialization period.

In the northern part of the museum are a library, a theater, seminar rooms, cafes and other facilities needed to meet the diverse roles of a 21st-century museum.

“As an archipelago museum, the eight galleries are like islands, flexibly linked by underground spaces and courtyards on the ground, never forcing visitors to flow in fixed directions,” Mihn explained. “In such a museum, it is easier for visitors to go directly to only the galleries that they want to see, unlike many modern art museums, such as the Guggenheim New York’s Rotunda, where all the visitors should walk along the same path.

“In addition, visitors can drop by an art shop in the DSC building in the museum’s western part or visit the library or the theater in the northern part, without passing through galleries. It’s an ‘open museum,’ with almost no fences on any side, so people can enter frequently for many different purposes without feeling burdened.”

This architectural concept, of intermingling interior and exterior spaces, is actually an element of past Korean architecture, but re-appropriated to contemporary conditions, according to some architectural experts.

“As a resident of this neighborhood, I feel comfortable and familiar with the museum,” said Choi. “There is no sense of disharmony, which I would have felt, if it were a unified, single building of imperialistic atmosphere.”

Choi also showed interest in the new museum’s courtyards. “They can be used as exhibition spaces by artists and viewers,” he said. “In particular, foreign artists will want to present their works in the yard in front of Jongchinbu.” 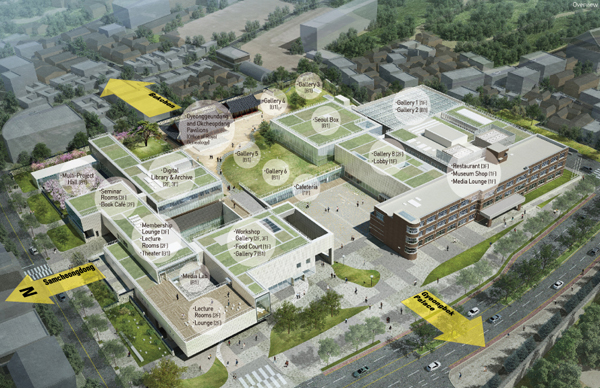 During the Joseon Dynasty, several government buildings stood here, including Jongchinbu. Many of them were demolished or relocated during the era of Japanese colonial rule (1910-1945), making way for a hospital to be built there instead.

Even after liberation, the site was used as a hospital complex for decades. Then, in the mid 1970s, the site was transformed into the Defense Security Command complex, with the red-brick building as its headquarters. The Command was relocated in 2008.

The MMCA Seoul project began during the administration of former President Lee Myung-bak in early 2009, when Lee announced a plan to transform the formerly closed area with a complicated political past into a place that welcomes the public and could be a hub for cultural interchanges - an art museum.

In 2010, architectural firms submitted more than 110 applications to design the new museum. A jury of nine Korean and foreign experts selected five finalists in February and then picked Mihn’s design in August. Construction started in 2011.

But even after being selected, Mihn’s plans faced several twists and turns.

The biggest controversy was over whether the project should continue at all, after important historical evidence was uncovered during preliminary inspections of the site in 2010. During the surveys, researchers discovered the stone base of Jongchinbu, which had been relocated to the nearby Jeongdok Library years before. Finally, a compromise was reached, and the museum design was adjusted to include the Jongchinbu buildings, which were returned from the library.

“The adjustment was not easy but it made the museum unique,” Mihn said.

“Yeah, there is no museum like it in the world,” Choi agreed. “Paradoxically, the many limits and restrictions [in the construction of the museum] made for the best outcome - the abundant mix of environmental and historical contexts. In this museum, you can see yesterday, today and tomorrow together at the same time.”

Another difficulty during construction came last year, when a big fire at the construction site caused months of delays.

And some controversies are still going on - most notably, whether a wall should be installed behind Jongchinbu.

Some cultural heritage advocacy groups say that a wall is needed to protect the Jongchinbu buildings, and in response the museum has agreed to set up a 2.2-meter-high wall separating the historic buildings from the street. But many in the neighborhood hate the idea.

“It goes against the whole ‘open museum’ concept,” Choi said. “How about we omit the wall at first and gather people’s opinions?”