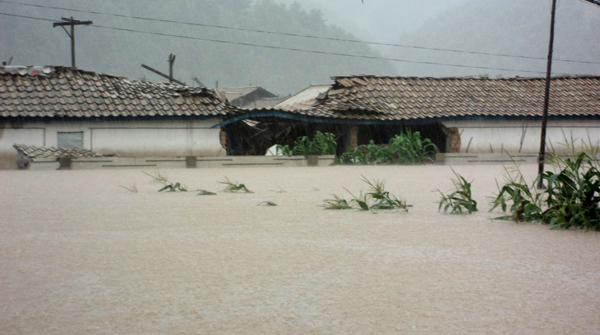 The South Korean Red Cross decided to offer humanitarian aid to North Korea in the wake of recent torrential rains.

Requested by the International Federation of Red Cross and Red Crescent Societies, the Korean Red Cross based in Seoul will offer emergency aid worth $100,000 to the North Korean regions battered by recent flooding.

“The IFRC has requested us for some aid for the North,” Kim Ju-ja, an official at the Korean Red Cross, told the Korea JoongAng Daily by phone. “So we decided to spend the special funds donated from civilians who asked us to use them only for the North Korean people.”

The Korean Red Cross will transmit $100,000 to the account of the IFRC, and the IFRC will offer daily necessities, such as tents or kitchen tools, through the North Korean Red Cross.

“We won’t offer food aid this year,” Kim said. “It’s a matter to be decided by the government.”

In 2010, the Korean Red Cross provided 5,000 tons of rice, 10,000 tons of cement and 3 million cup noodles to North Korea after floods. It received special subsidies from the South Korean government.

In 2011, the Lee Myung-bak administration tried to offer flood aid to the North through the Red Cross, but Pyongyang didn’t respond to the offer. In 2012, amid frosty inter-Korean relations, the Lee administration didn’t offer any aid.

So far, the Park Geun-hye administration has not provided any humanitarian aid from state coffers.

In the meantime, United Nations Secretary-General Ban Ki-moon appealed Thursday for funding for urgently needed food, health care and sanitation aid for millions of North Koreans, stressing that donors should not be put off by the reclusive state’s nuclear ambitions.

The UN said it needs almost $100 million to fund aid programs for the rest of 2013 in North Korea, where there are about 2.4 million people in need of regular food assistance. The world body said almost a third of children under the age of 5 suffer from chronic malnutrition.

“The lives of many people are at stake, including children who are vulnerable to lasting suffering if they do not receive aid,” Ban’s press office said in a statement.

“The secretary-general calls on prospective donors to respond to this serious situation. He stresses that humanitarian assistance should not be linked to political or security considerations,” it said.