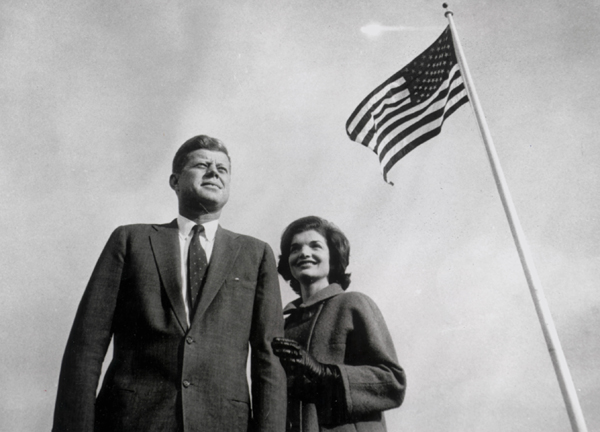 Author Thurston Clarke argues that something changed between former U.S. President John F. Kennedy, left, and his wife, Jackie, after the death of their infant son, Patrick, in August 1963. [JoongAng Ilbo]

For a blunt-titled book with a tragic conclusion that every reader knows from the start, Thurston Clarke’s “JFK’s Last Hundred Days’’ manages to surprise and even occasionally to delight.

This book is about life, a quick-pulsed three months of life, before it’s about death. It’s about forward movement and daily accomplishments, often history-making ones, before it’s about lost opportunities and, as the Israeli statesman Abba Eban characterized the assassination of the young president in his prime, “one of the most authentically tragic events in the history of nations.’’

It’s worth noting that among these 100 days were some that John F. Kennedy himself called his happiest.

The story line of these days takes the reader from early August 1963 through his death on Nov. 22. The book has the feel of a wide-ranging diary, each chapter focusing on a successive week or even a single day. It details Kennedy’s personal dealings - playing with his young children, John and Caroline, in the Oval Office, for example, or singing sentimental songs at the family compound in Hyannis Port, Mass. - as well as his political maneuverings and presidential actions. At times, the events are laid out hour by hour, but never tediously. 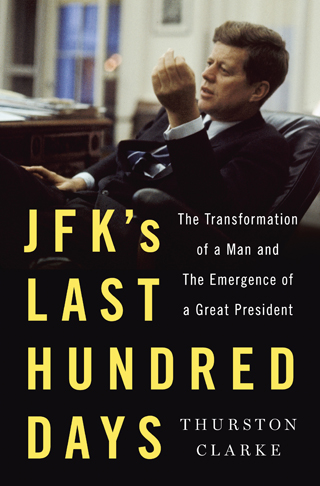 This was a time in which civil-rights activism was rising toward a crest. We see Kennedy conferring with black leaders and, in one testy White House meeting, with the white leadership of Birmingham, Alabama, amid deadly violence there. As the March on Washington plays out at the Lincoln Memorial, we see the president listening at an open White House window with a black doorman as the throng sings “We Shall Overcome.’’

We watch Kennedy plunge into foreign policy - pursuing back-channel contacts with the Cuban and Soviet leadership, wrestling with what to do about Vietnam, where a coup that his administration fostered ends with two South Vietnamese leaders being murdered. We’re privy to his horse-trading with congressional leaders, including his successful effort to win Senate ratification of the seminal Nuclear Test Ban Treaty.

Politics then was about bipartisan deal-making and constructiveness, as Clarke shows. He quotes Kennedy in what could be a rebuke of today’s bitter gridlock: “Let our patriotism be reflected in the creation of confidence in one another, rather than in crusades of suspicion.’’

The subtitle, “The Transformation of a Man and the Emergence of a Great President,’’ makes clear from the outset that this is an admiring chronicle.

Kennedy skeptics may be dubious of some of its implied or stated projections. Would the Civil Rights Act have passed if he hadn’t been killed? Would he have found the way out of Vietnam that he sought, or an approach to Russia and China that could have hastened the Cold War’s end?

Kennedy-phobics may roll their eyes at the book’s implication that JFK was becoming a better husband toward the end. While not glossing over his philandering history, it argues that something changed between Jack and Jackie Kennedy after the death of their infant son, Patrick, in August 1963. Citing times and places, Clarke suggests that JFK passed up specific liaison opportunities with other women; he also quotes multiple observers as noticing previously unseen loving looks and demonstrative gestures between the normally cool, private couple.

Such observations illustrate the highly effective research method employed by Clarke, whose previous book subjects have ranged from Pearl Harbor to Raoul Wallenberg.

Small, telling details about JFK get vacuumed up along with the big things, such as policy debates recorded by secretly installed Oval Office microphones, to create immediacy and surprise. When the always restless Kennedy doodles during dull meetings, Clarke’s descriptions of what he draws give a glimpse into the president’s mind.

On Nov. 21, during his final trip, he made a doodle on the stationery of a Texas hotel. This one wasn’t his typical impatient scribbling. He drew “a sailboat heeling slightly in the wind,’’ Clarke writes. “He put a diamond-shaped figure above it, perhaps one of the kites he and John had flown off the back of the (presidential yacht) ‘Honey Fitz’ the previous summer. .?.?. This one was evocative and serene.’’ AP