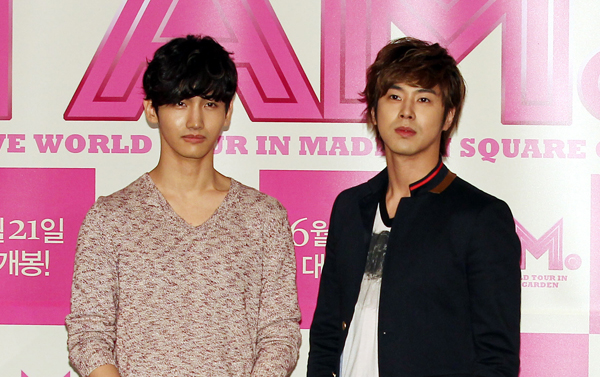 Boy group TVXQ mesmerized a whopping 144,000 fans over the weekend in Japan, playing two huge shows at the Nissan Stadium in Yokohama.

The event was reportedly the first time non-Japanese singers have performed at the stadium.

The two shows wrapped up the “TVXQ Live Tour 2013 Time,” 18 concerts that drew 850,000 fans across Japan over the past five months. SM Entertainment, the group’s management agency, says the tour has been the largest draw for any Korean act in Japan.

“We have climbed the ladder step-by-step, going from small performances in Jamsil [southern Seoul] to later ones in Japan,” said Yunho, one member of the duo, in a press conference after the concert. “I am excited how we have grown up since then.”

Yunho also said he was worrying a lot before the concert.

“Because the stage is really big, we worried if we would have the energy to continue running to every corner where fans are,” he said. “I was also worrying about how to entertain all the fans that filled the venue.”