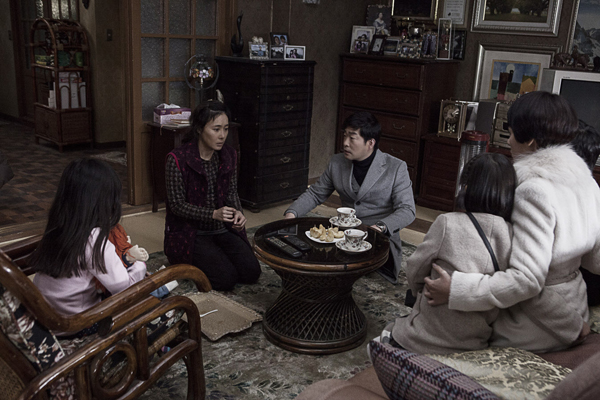 A scene from the new thriller “Hide and Seek.” [JoongAng Ilbo]

With big stars, a big director and Korea’s biggest distributor, “The Flu” was expected by most movie experts to dominate last weekend’s box office. The experts were wrong.

Instead, the smaller thriller “Hide and Seek” pulled the upset, easily taking the No. 1 slot.

“Hide and Seek,” made by first-time filmmaker Huh Jung, pulled in 1.35 million admissions over the weekend, or about 34 percent of the box office. Since opening Wednesday, the thriller, which stars Son Hyun-joo from the ongoing SBS drama “Golden Empire,” has made 15.1 billion won ($13.5 million).

Kim Sung-soo’s “The Flu” was second, but it had a decent opening, with 970,229 admissions over the weekend and 1.9 million since its release on Wednesday. It has made 13.1 billion won.

The big-budget sci-fi film “Snowpiercer” fell to No. 3, with 696,985 admissions over the weekend, bringing its three-week total to 8.2 million admissions. “Snowpiercer” has now made 58.7 billion won.

Following those four Korean movies, the rest of the Top 10 all went to animated films, including “Epic” in fifth with 175,514 admissions and “Turbo” in sixth with 79,621.

There were also two Japanese animated films, “Detective Conan: Strategy Above the Depths” in eighth and “The Garden of Words” in 10th. The Russian-produced “Wings” came in ninth.