Korea U., Sangmu meet in finals

Korea U., Sangmu meet in finals 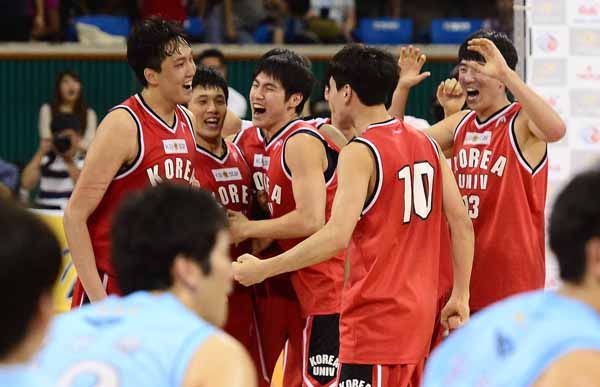 Korea University players celebrate after they beat Ulsan Mobis Phoebus 73-72 in a semifinal thriller at the KB Pro-Am Basketball Championship at Jamsil Students’ Gymnasium in Seoul, yesterday. They will face off against the Sangmu in the tournament’s all-amateur final today. [NEWSIS]

Korea University fended off a tenacious challenge from the Ulsan Mobis Phoebus yesterday and sent the Korean Basketball League reigning champions packing with a 73-72 win, setting up an all-amateur final at the KB Pro-Am Basketball Championship.

In the other semifinal game, Sangmu sank the 2012 KBL regular season winners, the Seoul SK Knights, 75-61, as the military team demonstrated grit and teamwork over the star-dependent professionals.

The Sangmu will have a shot at its second consecutive Pro-Am title against Korea University in the championship game today at Jamsil Students’ Gymnasium at 2 p.m.

The Phoebus, who came off a come-from-behind 76-73 win over college champ Kyung Hee University in Tuesday’s quarterfinals, wasn’t able to work similar magic against Korea University.

Instead, Korea University dominated on the inside, thanks in large part to Lee Jong-hyun, the 2.06-meter (6-foot-9) freshman center who emerged as a major new talent at the FIBA Asia Championship earlier this month. The 19-year-old scored a game-high 27 points, including a second-quarter dunk off an alley-oop pass from Park Jae-hyun to finish a fast break. He also grabbed a game-high 21 rebounds.

“I was concerned about Jong-hyun’s physical condition, but he played all 40 minutes and I really appreciated that,” said Korea University coach Lee Min-hyung.

Moon Sung-kon helped with the upset by adding 16 points. Lee Seung-hyun, a 1.97-meter (6-foot-6) forward, added nine points and 12 rebounds, including a buzzer beater at end the second quarter that gave Korea a 46-38 edge at halftime.

The Phoebus were dependent on Moon Tae-young - also known as Greg Stevenson - who scored 25 points and 11 rebounds. Ham Ji-hoon, a 1.98-meter forward, followed with 18 points while handing out six assists. The 2012 KBL MVP guard Yang Dong-keun helped with 11 points and nine rebounds.

The Phoebus trailed most of the game until it woke up in the third, clamping down on Korea University in a 23-14 run, finishing the quarter with a 61-60 lead. Korea University reclaimed the lead early in the fourth, but neither team was able to seize control, leading to a seesaw battle until the end of the game.

With the championship game looming today, Korea University is confident, having beaten Sangmu 87-72 the last time they met, at the 2012 finals of the Basketball Festival, an amateur tournament.

“Sangmu will enter the final game with much preparation,” Korea University coach Lee said. “I think we could have a chance to win because we have an edge in height.”

The Sangmu led the Knights by as many as 17 points, although it needed a late-game push to ensure the victory. Heo Il-young scored 23 points, including six 3-pointers, to lead the Sangmu players. Three other players also scored in double figures.

Sangmu started strong, carving out a 10-point lead in the first quarter, but they followed that good opening with two feeble quarters to trail 52-48 at the end of the third.

In the fourth, however, the Sangmu bounced back quickly, connecting on a series of jumpers early in the quarter, while limiting the Knights to nine points. Yoon Ho-young led the late surge, chipping in with nine of his 20 points in the fourth.

Park Chan-hee had seven points in the quarter, to end the day with 11, while Lee Jung-hyun finished with 17 points, six of them in the fourth.

Yoon played the entire game, while three other key players, Heo, Park and Lee, played more than 35 minutes each. “I should have given them more rest,” said Sangmu coach Lee Hoon-jae.

“The final game will be really difficult. I will have to put much thought into how we’ll play it.”