Two K-pop teams, but only one gets a shot

Two K-pop teams, but only one gets a shot 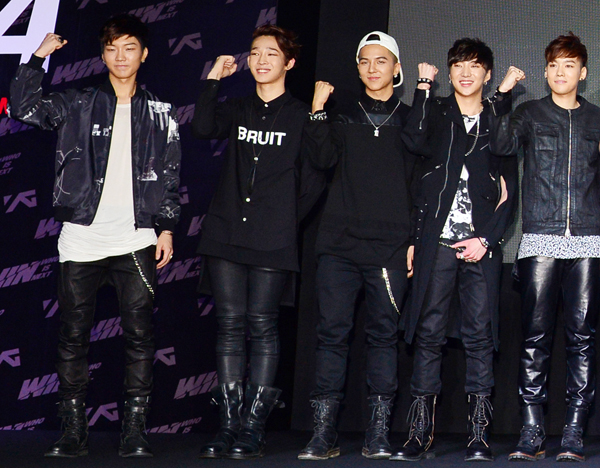 Move over Big Bang, there’s a big new boy band coming. And it’s coming from the music mogul who brought us ... Big Bang.

“Eight years from now, we think that this group will be the next Big Bang,” said Yang Hyun-suk, founder of YG Entertainment.

Brave words considering even Yang does not know who the next group will be yet.

Instead, YG Entertainment has created two groups, both of whom will square off and fight for the chance to be Yang’s newest singing sensation on the 10-episode TV series “WIN” - which stands for “Who Is Next.”

Yang spoke at a press conference on Tuesday to promote “WIN,” which begins tonight at 10 p.m. on two channels, both Mnet and tvN.

He described how 11 guys will compete to become YG’s first new boy band in seven years.

Team B is younger, with an average age of just 17. But it does boast the 17-year-old rapper B.I. (Kim Han-bin), who was featured on MC Mong’s “Indian Boy” back when he was just 12-years-old.

To decide which group will win the competition, Yang said that he’s leaving it entirely in the hands of viewers. Audience votes alone will determine the outcome.

With YG Entertainment on such a hot streak these days, the international rights to “WIN” have been quickly snatched up.

More than 10 channels belonging to the Hong Kong-based Star TV network will air the show from Sept. 17, and Arirang TV will later broadcast it to nearly every country around the world.

At the press conference, Yang answered some questions about the program.

Q. Which team do you think will win?

A. Before watching the show, I’m sure everyone will think Team A, because it has both Lee Seung-hoon and Kang Seung-yoon. But Team B’s mean age is just 17, so Team A better watch out because those youngsters have a lot of potential. Sound-wise, the two teams are very different, too. Team A has more of a pop feel, while Team B is more hip-hop and R&B.

Many were puzzled that you didn’t debut Kang Seung-yoon sooner. What was the reason?

On “Superstar K,” Kang Seung-yoon had a rocker image. Just as he was back then [in 2010] he could have signed with any agency. From our perspective, we saw 25 percent of his potential, and I wanted to tap into his other 75 percent. Sure he could sing rock’n’roll, but I wanted him to be able to handle R&B and dance. It took three years to do that.

Even though all the contestants are your trainees, you must have favorites. Who are they?

You always do care more for those you know longer. And I do like those who are more talented. From Team A, I like Kang Seung-yoon and Song Min-ho, who is a great rapper. From Team B, I like B.I. and Bobby best.

Initially, you said you wanted to debut a girl group this year. Why the change of heart?

I did want to produce a girl group, like Girls’ Generation. It’s human nature to want to make pretty things. But I guess there is something in my orientation that leans more toward talent than beauty. No matter how good-looking someone is, if they don’t have the talent, I eliminate them.

I often wondered what it would be like to have a pretty band like Girls Generation do hip-hop. But the female trainees weren’t ready. There were pretty girls, but in short there was no girl group at the agency that I could back 100 percent. On the other hand, these boys were all ready.

TV is full of singing competition shows. How is this one different?

It’ll be a lot crueler than other shows. With audition shows up until now you’ve seen the edited, clean version, and I’ve been somewhat friendly with the contestants because they were not my trainees. But this time they are “my kids,” so I’ll treat them as you do your own children because there’s more on the line.

In the 12 years I’ve been head of YG, all the songs I thought would do well didn’t. I’ve learned that you can never predict the public. I trust the public’s choice and am sure I’ll agree with the verdict.