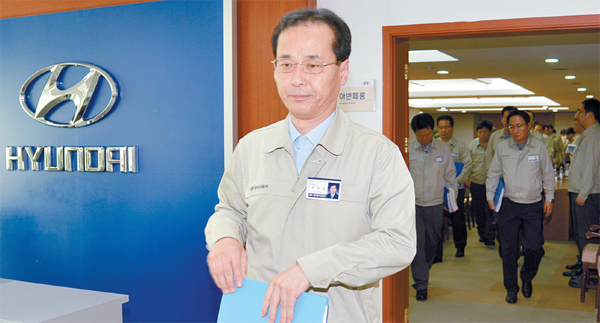 Hyundai Motor President Yoon Gap-han leaves the negotiating room at the company’s plant in Ulsan yesterday without an agreement with the labor union. However, both sides decided to continue low-level talks. [NEWS1]

According to the nation’s top automaker, Hyundai Motor President Yoon Gap-han, union leader Moon Yong-moon and 50 representatives from both sides began the meeting at 3 p.m. at the company’s Ulsan Plant.

It was the first time in 16 days the two sides sat down together after negotiations were broken off by the union Aug 6.

According to the company, management offered its opinion on 73 proposals - not including wages and bonuses - which the union rejected. No further sessions have been scheduled, though both sides agreed to continue low-level talks.

The union, which represents about 46,000 employees, staged partial strikes Tuesday and Wednesday. After the failure of yesterday’s talks there is a possibility the union could launch a full scale strike or another longer partial strike.

“Our labor action measures committee will come up with an evaluation of management’s proposals and follow-up measures as soon as the meeting ends,” the union said earlier yesterday.

The partial strikes on Tuesday and Wednesday reduced production by 4,705 vehicles and caused more than 96 billion won ($85.7 million) in damages, according to the company.

Hyundai’s union is demanding an increase of 130,498 won in basic monthly salary with a bonus equal to 30 percent of the company’s net profit.

Other proposals include extending the retirement age one year to 61 and paying 10 million won to workers whose children don’t go to college and decide to seek jobs. Hyundai currently offers college scholarships to children of its employees.

Meanwhile, the situation seems no different for Hyundai’s sister company, Kia Motors, which also went through a partial strike on Wednesday and delayed the production of about 1,500 vehicles.

Members of Kia’s labor union have said they will keep their eyes on the results of Hyundai’s bargaining before deciding on future action. The proposals from Kia’s union are similar to Hyundai’s.

Hyundai Motor Group has been saying that if the union launches strikes frequently in the future, it will consider expanding overseas production to meet the demand. Hyundai Motor Group Chairman Chung Mong-koo met with Georgia Gov. Nathan Deal in Seoul on Wednesday. Kia runs a plant in Georgia that can produce 360,000 vehicles in a year.

Industry insiders expected the meeting between Chung and Deal would include a discussion about expanding the production capacity of the plant or possible construction of a new plant there, but Hyundai Motor Group has denied such speculation.