‘Gutenberg: The Musical’ is funnier than you think

‘Gutenberg: The Musical’ is funnier than you think 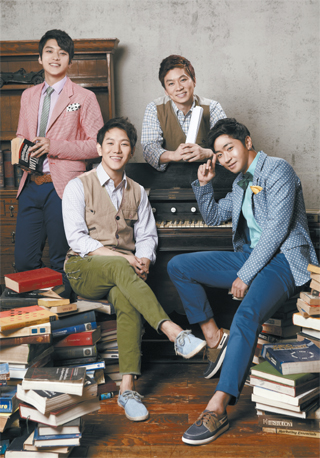 The Korean production of “Gutenberg: The Musical,” which runs from Saturday to Nov. 10 at the Chungmu Art Hall, double cast four actors (above) to play the roles of Bud and Doug. Provided by Shownote

It’s hard to imagine that a musical about the life of Johannes Gutenberg, the 15th-century inventor of the printing press, could evoke so many laughs, let alone its plain title, “Gutenberg: The Musical.”

But in the rehearsal room for the Korean production of the musical, it was proved to be possible, even in Korean.

“Gutenberg: The Musical,” written by Anthony King and Scott Brown, only requires two people onstage: the aspiring playwrights Bud and Doug. The musical is performed as a backer’s audition by Bud and Doug as they present the ostensibly bound-for-Broadway musical to the “Broadway producers who are sitting among the audience,” in hopes of becoming as successful and as legendary as the duo playwrights Andrew Lloyd Webber and Tim Rice. However, as they are “not yet successful,” they couldn’t afford to cast actors and actresses for the characters, and instead use baseball caps with character names like “Another Woman,” “Drunken man No. 1” and “Anti-Semitic flower girl” written on them to play 30 other roles.

Last week, Korean actors for the Korean production of the musical revealed their rehearsal room in central Seoul to the media and said they were able to “gain confidence that such an experimental show that has never been staged in Korea can succeed after watching the reporters in howls of laughter.”

Throughout the “historical fiction” musical, in which the two playwrights “forcefully” inserted themes like the Renaissance and the Holocaust, Bud and Doug switch baseball caps and voices to perform every role in the show. They even play two or three characters at once, with one baseball cap on their head, while holding the others in their hands. For example, to show a moment when a baby girl dies due to an illiterate mother’s mistake in the prologue, Doug turns a baseball cap that’s lying on the floor upside-down. 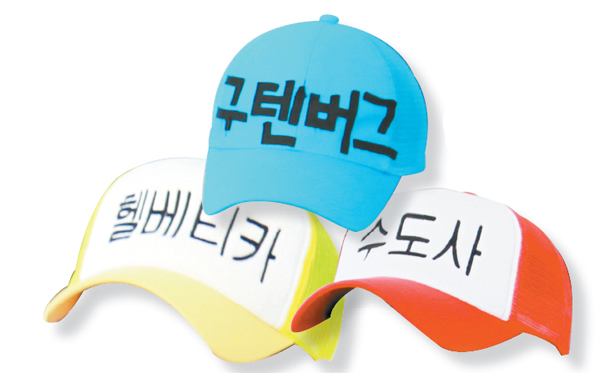 The two-man musical uses baseball caps for all its characters.

“This musical will allow the audience to stretch their boundless imagination,” said Song Yong-jin, who was double-cast to play Bud for the Korean production of the musical. “It’s like the short tale ‘The Emperor’s New Clothes,’ where two weavers produce a new suit for the king that is invisible to those unfit for their positions, stupid or incompetent. Those with an exuberant imagination can enjoy the musical as a spectacular Broadway show, while some may watch it as a show for a small theater.”

Four actors have been cast for the musical, two for Bud and Doug.

In addition to Bud and Doug, a third person is needed to complete this musical: the pianist. As the two ambitious playwrights can’t afford to bring in an orchestra, they’ve hired a pianist to play all the music in the musical. For the Korean production of “Gutenberg: The Musical,” music director Yang Joo-in takes the role. The music, according to the cast for the Korean production, is one of the main reasons why they decided to take part.

“When I heard from the Korean producer that he’s thinking about staging the musical in Korea, I told him to send me the script and the music. As soon as I heard the music, I just had to be part of this musical,” said Song. “In fact, the producer was still thinking whether he should do it or not, so I persuaded him to do it.”

According to Yang, the music director, even the music requires the audience’s imagination.

“The audience can imagine how the music will turn out by an orchestra by listening to the tunes of the piano. In the musical, this one instrument even signals the changes in time and space, the changes in the scenes and acts,” said Yang, who directed large musicals such as “High School Musical” and is working on the Korean production of “Wicked.” “The more I listen to the music, I was mesmerized by it deeper. Imagination, I believe, is the key to enjoy this musical both theoretically and musically.”

Kim Dong-yeon, the artistic director said, “I was able to sympathize with Bud and Doug in the musical as I, myself, have staged my works in front of producers. There are some works that were able to be staged in front of the public, while others failed and just remained on paper. Bud and Doug are aware of this, too. They know it may not interest the Broadway producers on the night of the show, however, they enthusiastically pull off the show.”

Taking such circumstances of playwrights, Shownote, the Korean production company, said it will give a 30 percent discount to “those who study in the field of theater, working hard to create a performance like Bud and Doug.” Those who can receive the benefit includes university students who major in literary creation; film and theater; dramatic performance; musical, music composition; dramatic writing; and performance planning.