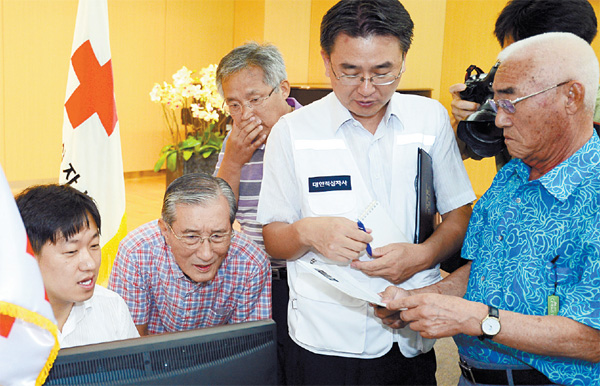 South Korean applicants check if they have been selected for reunions of war-separated families on Sept. 25-30 at Mount Kumgang at the headquarters of South Korean Red Cross in Seoul last Friday. Among 72,882 applicants, only 500 were nominated and 100 will be on the final list. [NEWSIS]

South Korea has nominated 500 people as candidates for upcoming reunions with their war-separated families and relatives in North Korea, taking a step toward the first such reunions in three years.

Both Koreas agreed on holding reunions for families separated during the 1950-53 Korean War as part of efforts to ease tensions on the Korean Peninsula and restart inter-Korean relations at a low-level meeting between Red Cross officials last Friday.

The South Korean Red Cross selected the candidates for the reunions scheduled for Sept. 25-30 at Mount Kumgang Resort, although only 100 of them will be chosen after the North Korean Red Cross checks the whereabouts of their families in the North and whether they are still alive.

So far, a total of 18,000 North and South Koreans have participated in government arranged face-to-face reunions, while 3,700 have interacted with relatives via video.

The 500 candidates were selected through an electronic lottery system based on their age and relationship with families in the North - if they have spouses, parents or children in the North, they are more likely to be selected.

The Red Cross will trim the list by half based on whether the nominees are physically able to visit and still willing to meet with their families.

North Korea also will select its own 500 candidates and exchange the final list of 100 people from each side for the reunions on Sept 16.

Another round of family reunions also will take place on a yet-to-be-decided day in November.

Separately from the face-to-face reunions, the two Koreas will convene a video conference Oct. 22-23 for 40 other families from each Korea.

The family reunions have been halted since November 2010.

Despite rising expectations with the upcoming reunions, the South Korean government is under fire because it failed to persuade Pyongyang to expand the reunions and make them regular events.

So far, the reunions have been irregular and limited to a total of 200 North and South Korean applicants.

The South also wanted to launch a system to check the whereabouts of POWs or abductees in the North and allow them to exchange letters with their families in the South.

For more frequent and regular reunions, South Korea proposed that they be held in both Seoul and Pyongyang, not Mount Kumgang Resort, which has been closed since a South Korean tourist was fatally shot there in July 2008. But North Korea turned down all new proposals, according to the Unification Ministry.

Unification Minister Ryoo Kihl-jae said in a TV interview with KBS yesterday that “North Korea told us it would take 100 days [if we hold reunions in Seoul or Pyongyang]. So we thought it would be better to hold the reunions as soon as possible.”

South Korea has not responded to Pyongyang’s proposal for talks to restart Mount Kumgang tourism, as the issue is linked to UN sanctions against the regime.

Since the shooting incident in 2008, Seoul has demanded that Pyongyang offer a formal apology and take reliable measures to prevent further accidents, but the North refused.

Seoul also worries that restarting tourism with Pyongyang would offer “bulk cash” for the impoverished regime, which is banned under recently adopted UN Security Council resolutions 2087 and 2094.

Asked about the allegation that the Kumgang business would violate sanctions, Minister Ryoo said, “We can’t ignore the various opinions in our society and international community, so now we are at the moment of reviewing and considering various things.”