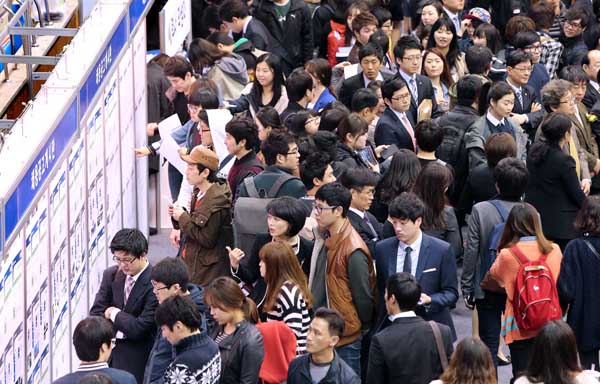 Job seekers consisting of high school and college graduates look at postings at a fair with 40 participating companies at Pukyong National University, southeastern Busan, in March. By Song Bong-geun

Internships have long been a way for students or new college graduates to launch their careers by gaining invaluable practical experience and taking advantage of networking opportunities. Many times, internships lead to full-time jobs.

Landing coveted internships with the help of well-connected family or acquaintances is nothing new. But with fewer internships being offered by companies struggling with declining revenues in a difficult economy, many young people who lack connections or social status are being left behind.

The trend is particularly disquieting at a time of increasing concerns about social and economic inequality. Kim Sung-ho, 21, started working at a securities firm in July thanks to his father, who is an executive at a conglomerate. In June, he also interned at the National Assembly.

The securities firm has hired only 10 permanent employees so far this year, compared to 40 or more in previous years. Similarly, it used to bring on numerous interns, but this year there are four including Kim. And all of them have connections.

On college campuses, newly-coined phrases like “noble interns” and “rebate interns” are used by students and job-seeking graduates to refer to their peers who have plum internships because of the influence of parents or relatives.

According to a Korea Employers Federation survey last year of 375 companies with internship programs, almost 95 percent planned to hire permanent workers from their interns.

Korea’s No. 1 conglomerate, Samsung, hired 9,000 permanent workers with college degrees last year and 2,520 recruits, or 28 percent, had an internship at a Samsung affiliate.

At SK Holdings, there were 100 applicants for every internship this year. The competition is even fiercer at state-run companies, like Korea Deposit Insurance Corporation, with an applicant-to-internship ratio of 307-1.

Despite the fact that the vast majority of internship seekers are at an extreme disadvantage, there is no legal basis for regulating internships awarded based on connections.

“It is difficult to prove the fact that someone obtained the position because of their personal connections,” said Kim Hyung-gwang, a youth employment division manager at the Ministry of Employment and Labor.

Recent Seoul-based college graduate Kim Young-sun submitted applications for 19 internships and 26 permanent positions since the first half of last year. No company accepted her.

“I am worried that if I lack internship experience it will be a disadvantage for me,” Kim said.

She is now looking for a teaching position at private academies, instead of large conglomerates.

Meanwhile, businesses reject the suggestion that landing an internship is all about who you know.

“The selection processes are transparent nowadays,” said one corporate official. “It is rare that someone gets a position only because of personal connections.”

In the workplace, though, some “noble interns” cause problems because they are either incapable or unwilling to work.

“During the summer and winter breaks, almost 30 requests come in every year. Many interns hired through these requests are not willing to work at all, so managers on the front lines want to avoid having interns in their departments,” said Jeong Seung-ho, human resources director at one of the nation’s top conglomerates.

“Rather than actual legislation or regulation, industries themselves have to stand by a code of ethics,” added Kim Dong-one, a management professor at Korea University.