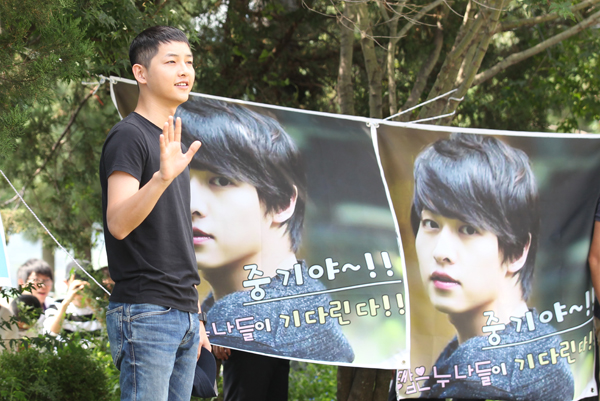 Actor Song Joong-ki, of the movie “Werewolf Boy” and the KBS drama “The Innocent Man,” said goodbye to fans gathered to see him yesterday for the last time before his military enlistment in Chuncheon, Gangwon.

Around 100 fans gathered to get a last glimpse of their favorite celebrity before sending him off to the military.
“I’m very thankful that you traveled far to here,” said Song. “I’ll stay healthy so don’t worry.”

Both overseas fans and foreign media visited Chuncheon for the farewell, proving the international stardom Song has achieved through his movies and dramas.

The actor, who made his debut back in 2008, will undergo five-week basic training before being assigned to a local base to serve his 21-month service.