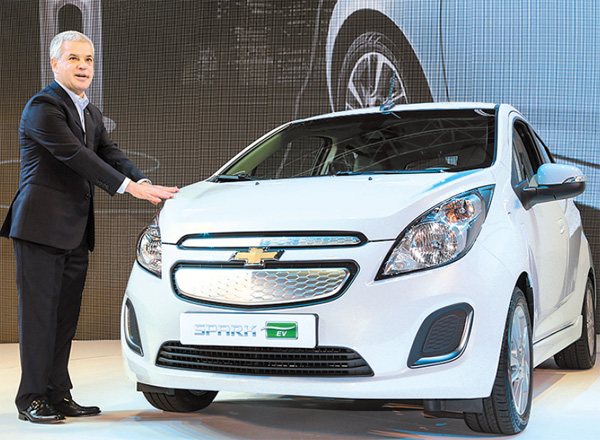 Korea will be the second country - after the United States - where the Spark EV will be sold. The car is manufactured at the automaker’s Changwon plant in South Gyeongsang and debuted in the American market in June.

GM Korea will begin commercial production for the domestic market Sept. 16, and deliveries will begin in early October, the company said.

The company said that despite the Spark EV’s small size, its permanent magnet electric motor can produce more than 143 horsepower and instantaneous torque of 57.4 kilogram-meters, which enables the vehicle to go from zero to 100 kilometers per hour (62.1 miles per hour) in 8.5 seconds.

The Spark EV offers estimated city/highway fuel efficiency of 5.6 kilometers per kilowatt hour with a best-in-segment driving range of 135 kilometers on full charge, according to GM Korea’s data.

The Spark EV’s 21.4-kWh lithium-ion battery pack weighs 254 kilograms (564 pounds). It has been engineered to enable both regular alternating current (AC) charging and direct current (DC) fast charging. The battery can be recharged to 80 percent of capacity in 20 minutes during fast charging. The battery system is capable of handling multiple DC fast charges daily and AC recharging requires six to eight hours using a 220V outlet, the company said.

“We are offering a warranty of eight years or 160,000 kilometers on the battery, which is the most extensive warranty available in Korea,” said Rocha.

GM Korea said the global market for environmentally friendly vehicles in 2012 grew by 1 million units, up 79 percent from the previous year. It expects EVs will account for 40 percent of the auto market by 2050.

However, industry insiders said that there will be fierce competition in the domestic EV market from the Kia Ray EV and Renault Samsung Motors’ SM3 Z.E, which will go on sale in October.

According to GM Korea, the Spark EV will have a retail price of 39.9 million won ($35,740), but with tax incentives the price drops to the 17 million won range, the cheapest EV on the domestic market. RSM’s compact size SM3 Z.E. will be near 20 million won, while Kia’s Ray is about 30 million won. The final retail price differs by city depending on incentives.

“Relative to price, we foresee the Spark as placed between the two competitors,” said Marc Comeau, GM Korea’s vice president for sales, service and marketing. “We view this as very smart choice for environmentally sensitive consumers.”

To boost the popularity of EVs, GM Korea said it will help set up a fast-charging charging infrastructure.

“It is true there are some inconvenient aspects like a lack of infrastructure, but the government is putting its best effort forward to support electric vehicles in the country,” said Jeong.

As for speculation that GM might be planning to shift some of its operations out of Korea, Rocha said producing the Spark EV in Changwon “is the beginning. We are here to stay.”