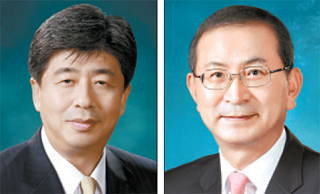 Woori Financial Group announced chief executive nominees for eight affiliates including the group’s card and asset management arms. The nominations were made almost two months after Lee Soon-woo became the group’s new chairman and more than a month after the government kicked off its process of privatizing the country’s largest financial holding company based on assets by separating affiliates into three groups.

According to Woori Financial Group yesterday, its chief executive nominating committee confirmed chief nominees of the group’s eight affiliates after several meetings. The committee has reported the nominations to each affiliate’s board of directors. Many former and current vice presidents of Woori Bank were on the list.

“We expect the process of appointing nominees to be completed tomorrow [today] after confirmation by each affiliate’s board and shareholders’ meeting,” said an official from Woori Financial Group. “The committee is known to have selected nominees based on their expertise and the ability to maximize the value of the group so that privatization is carried out smoothly.”